"The problem with this type of pattern is that there is a tendency for what is termed the AD (Arctic Dipole) consisting of exceptionally high pressures over Northern Canada to Greenland. When the air leaves this region heading for the low pressure regions (winds) it curves to the right (due to Coriolis force) and is thus driven from the Bering Strait region to the North Pole and then out Fram Strait, this conduit is like flushing the toilet on the ice. Warm water is pulled to the cold North Pole and the ice is driven out the Fram Strait into the warm Atlantic where it is melted."

"But the really big problem is that this high pressure area over Northern Canada is a ridge (blocking) that stays pretty stationary over the summers and is directly causing the heat waves and drought in the western US (2003, 2011, 2012). Another really big problem is that the part of the ridge over Greenland (or large GBI = Greenland Blocking Index); as discussed by Overland, Francis, et. al. in 2012 causes excessive melt in Greenland (as we saw in July, 2012 when 97% of Greenland was melting on the surface instead of the usual 40%). This is sending the Greenland albedo into a steep drop, causing even more heat absorption and melting."

To illustrate this further, Paul adds the animation below, from weather.unisys.com.

Paul adds: "The Greenland high could reach 1070 mb in next few days; that will bring huge temperatures! By comparison, the world record highest was 1085 in Mongolia in December 19, 2001".

The 1070 mb high over Greenland is further illustrated by the image below, from weather.unisys.com.

Indeed, as the jet stream slows down and becomes more wavier, such patches of warm air can be expected to extend more regularly into the Arctic. The result can be a huge melt of Arctic sea ice, as well as a huge melt of snow cover in Greenland, which also dramatically lowers albedo, as occurred in 2012 and as discussed in the earlier post Greenland is melting at incredible rate.

This spells bad news for the Arctic sea ice, which may well disappear altogether this summer.

Paul further adds: "For the record; I do not think that any sea ice will survive this summer. An event unprecedented in human history is today, this very moment, transpiring in the Arctic Ocean. The cracks in the sea ice that I reported on my Sierra Club Canada blog and elsewhere over the last several days have spread and at this moment the entire sea ice sheet (or about 99% of it) covering the Arctic Ocean is on the move. Clockwise. The ice is thin, and slushy, and breaking apart."

"This is abrupt climate change in real-time. Humans have benefitted greatly from a stable climate for the last 11,000 years or roughly 400 generations. Not any more. We now face an angry climate. One that we have poked in the eye with our fossil fuel stick and awakened. And now we must deal with the consequences. We must set aside our differences and prepare for what we can no longer avoid. And that is massive disruption to our civilizations."

The animation below, from genomewiki.ucsc.edu shows cracks in the sea ice with the Wikipedia image underneath showing the location. 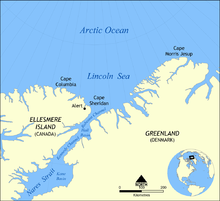 - Greenland is melting at incredible rate
- Diagram of Doom
- From Heat Wave to Snowstorms, March Goes to Extremes (at ClimateCentral.org)