Arctic waters are heating up

The post Fires are raging again across Russia featured the image below, showing how much sea waters in the Arctic were already warming up on June 15, 2012.

The animated image below shows warming of Arctic waters for the period June 13 up to July 1, 2012.

Sea water temperatures in the Arctic are likely to warm up even further, as the summer sun warms up the ocean currents and the rivers, and as less sunlight gets reflected by sea ice and is instead warming up ever larger areas of water. The image below shows the extent to which waters did warm up in September 2011. 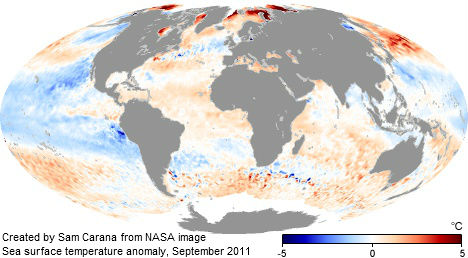 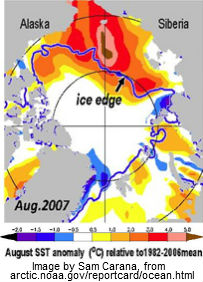 As described in the post Abrupt Local Warming, sea surface anomalies of over 5 degrees Celsius were recorded in August 2007 (NOAA image right).

Strong polynya activity caused more summertime open water in the Laptev Sea, in turn causing more vertical mixing of the water column during storms in late 2007, according to one study, and bottom water temperatures on the mid-shelf increased by more than 3 degrees Celsius compared to the long-term mean. 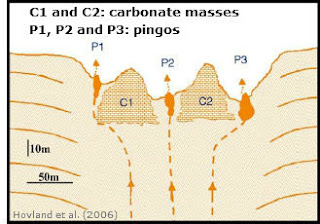 Finally, remember the image that Professor Peter Wadhams added in his supplementary evidence to the EAC. Below is an annotated version, from Arcus.org.