The National Snow and Ice Data Center (NSDIC) has released an update of its Arctic Sea Ice News & Analysis (April 4, 2012). 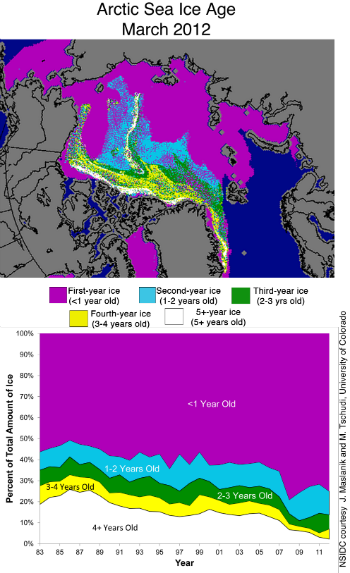 Ice age data this year show that the ice cover remains much thinner than it was in the past, with a high proportion of first-year ice, which is thin and vulnerable to summer melt.

After the record low minimum of 2007 the Arctic lost a significant amount of older, thicker ice, both from melting and from movement of ice out of the Arctic the following winter. In the last few years, the melt and export of old ice was less extreme than in 2007 and 2008, and multiyear ice started to regrow, with second and third-year ice increasing over the last three years.

After the near-record melt last summer, second-year ice declined again, but some of the ice that had survived the previous few summers made it through another year, increasing the proportion of third- and fourth-year ice. However the oldest, thickest ice, more than four years old, continued to decline.

Ice older than four years used to make up about a quarter of the winter sea ice cover, but now constitutes only 2%. First-year ice (0 to 1 years old) this year makes up 75% of the total ice cover, the third highest at this time of year in the satellite record. In 2008 the proportion of first-year ice was 79%, and in 2009 it was 76%.

Rapid Arctic warming is altering the course of the jet stream

NSDIC also points at a study by Jennifer Francis of Rutgers University and Steve Vavrus of the University of Wisconsin that suggests that warming in the Arctic is causing weather patterns in mid-latitudes to become more persistent. This persistence can lead to conditions like heat waves, cold spells, drought, flooding, and heavy snows. The researchers found that as temperatures in the Arctic warm and become closer to temperatures in lower latitudes, the waves of the jet stream tend to spread out, and west-to-east winds slow down in the upper level of the atmosphere (where storm tracks form). Both of these effects tend to slow the progression of weather patterns, which means that a weather pattern, whether hot or cold, is more likely to stick around.