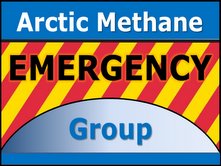 We declare there now exists an extremely high international security risk* from abrupt and runaway global warming being triggered by the end-summer collapse of Arctic sea ice towards a fraction of the current record and release of huge quantities of methane gas from the seabed. Such global warming would lead at first to worldwide crop failures but ultimately and inexorably to the collapse of civilization as we know it. This colossal threat demands an immediate emergency scale response to cool the Arctic and save the sea ice. The latest available data indicates that a sea ice collapse is more than likely by 2015 and even possible this summer (2012). Thus some measures to counter the threat have to be ready within a few months.

The immediacy of this risk is underlined by the discovery of vast areas of continental shelf already in a critical condition as a result of the warming of the Arctic Ocean seabed. Increasingly large quantities of methane are being emitted from the seabed. Moreover there is the possibility of methane held as hydrates or under thawing permafrost being suddenly released in very large quantities due to some disturbance such as an earthquake. The quantities of methane in the continental shelf are so vast that a release of only one or two percent of the methane could lead to the release of the remaining methane in an unstoppable chain reaction. Global warming would spiral upward way beyond the 2 degrees which many scientists consider the safety limit.

However we do not take a defeatist attitude towards this extremely dangerous situation. The present challenge to overcome almost impossible odds is reminiscent of World War 2. There exist the talent, technology and engineering skills to fight against these odds and win, given determination, focus and collaboration.

Governments must adopt a plan of action to cool the Arctic, halt the retreat of the Arctic sea ice and slow the release of methane. A variety of means of cooling the Arctic are available, some of which may be classed as geoengineering.

Governments must furthermore put in place the necessary monitoring procedures for assessing the situation, allowing accurate modelling and determining the effectiveness and safety of the measures taken.

But intervention on a large scale has to be accepted in order to avert the ultimate catastrophe of runaway global warming. No amount of adaptation or insulation could make that survivable. We demand for all nations to pull together in battle against these threats. We consider it a moral duty: to fight against destruction of the climate system in order to protect the lives of all citizens.

Note that AMEG considers that the cooling of the Arctic should be seen one of many efforts to bring the atmosphere and oceans back towards their pre-industrial state, especially since such efforts reduce both immediate and longer-term risks arising from Arctic warming, sea ice retreat and methane release. AMEG is fully supportive of these efforts.