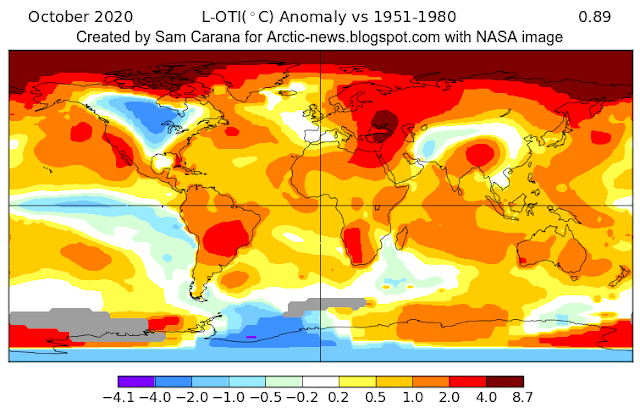 Above image shows that, in October 2020, the Arctic Ocean was very hot. The Copernicus image below shows temperatures averaged over the twelve-month period from November 2019 to October 2020. 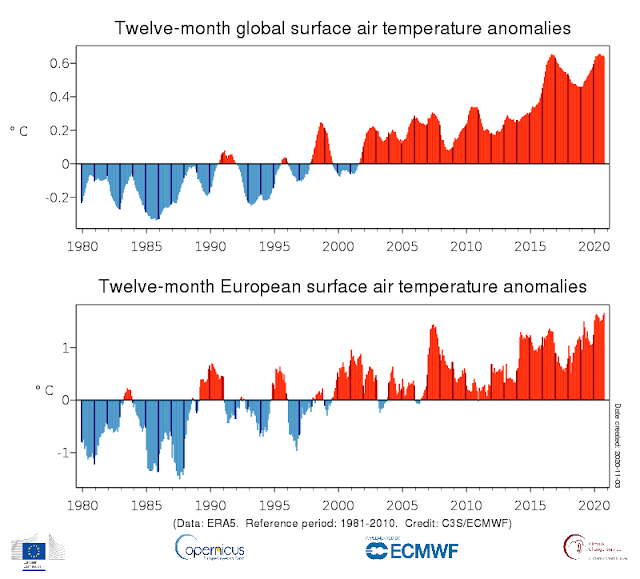 Keep in mind that, in the Copernicus image, anomalies are compared to the 1981-2010 average.

Note that the shape of the recent twelve-month period is similar to the 2016 peak, when there was a strong El Niño, while in October 2020 the temperature was suppressed due to La Niña and due to low sunspots.

The image below shows how a hot Arctic Ocean distorts the Jet Stream and hot air moves all the way up to the North Pole. 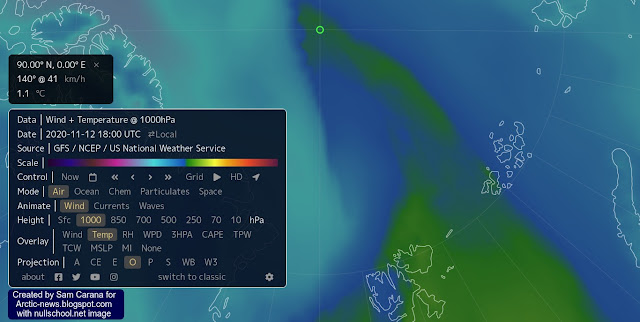 The image below shows temperature anomalies for November 12, 2020, with forecasts approaching 30°C. 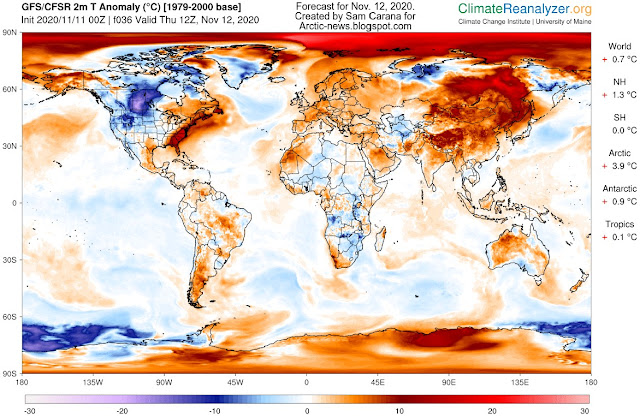 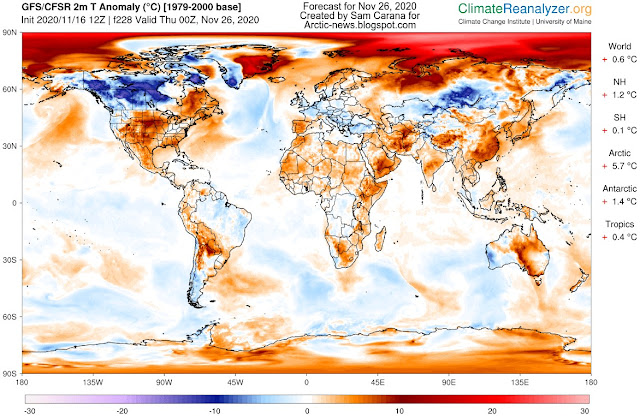 The resulting distortion of the Jet Stream can at times speed up winds that move hot air from the North Atlantic Ocean toward to Arctic Ocean, as illustrated by the image at the top.
The image on the right shows that the Jet Stream was as fast as 411 km/h or 255 mph south of Greenland (at the green circle), before crossing the Arctic Ocean on November 4, 2020.
The image below shows how, on November 20, 2020 15:00 UTC, a distorted Jet Stream reaches a speed of 327 km/h or 203 mph (at circle, globe left). At 850 hPa, wind reaches speeds as high as 161 km/h or 100 mph (circle, globe right).
The danger is that such strong wind will speed up ocean currents in the North Atlantic that carry huge amounts of heat toward the Arctic Ocean.

According to a recent news report, an atmospheric river smashed into Juneau, Alaska, dropping 5.08 inches of rain in 24 hours ending 3 a.m. Wednesday December 2, 2020.

These high sea surface temperatures speed up de Jet Stream over oceans. At this time of year, temperatures over continents are low, so there is greater ocean/land temperature difference, which further speeds up the Jet Stream where it travels over oceans toward continents. The center globe shows wind as fast as 381 km/h or 237 mph at the time (at circle).
At the same time, the narrowing temperature difference between the Equator and the North Pole is slowing down the Jet Stream. This is making the Jet Stream more wavy at higher latitudes, even resulting in circular wind patterns, and this can make a lot of cold air leave the Arctic and move over continents, thus further widening the ocean/land temperature difference. Given that more than 90% of global warming goes into oceans, this is an important self-reinforcing feedback of global warming.
Stronger wind results in stronger evaporation, which cools down the sea surface somewhat, as the blue areas over the Pacific Ocean indicate. Due to the strong wind, much of the moisture falls down farther on the path of the wind. The globe on the right shows 3-hour precipitation accumulation as high as 31.3 mm or 1.23 in off the west coast of North America (green circle).

The image below shows an earlier analysis, describing the situation in September 6, 2020, when high sea surface temperatures on the Northern Hemisphere and a narrow difference between the Equator and the North Pole distorted the Jet Stream, making it cross the Arctic Ocean, form circular wind patterns and reach speeds as fast as 262 km/h or 163 mph (250 hPa, green circle) over the North Atlantic. The globe on the right shows that the Gulf Stream off the North American coast reached speeds of 8 km/h or 5 mph (at green circle).
More ocean heat can move into the Arctic Ocean for a number of reasons, including:
As the image below shows, sea surface temperatures as high as 16.6°C or 61.9°F were recorded north of Svalbard on November 9, 2020. 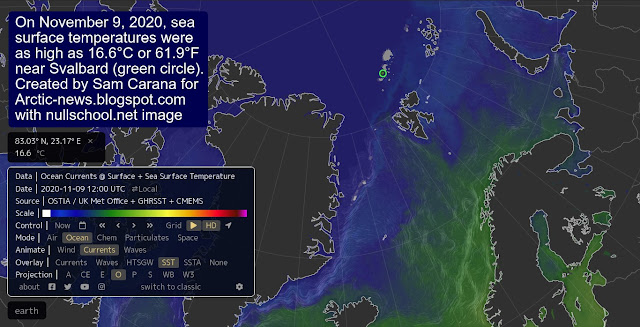 As the image below shows, the N2O satellite recorded a peak methane level of 2762 ppb on the morning of November 16, 2020. 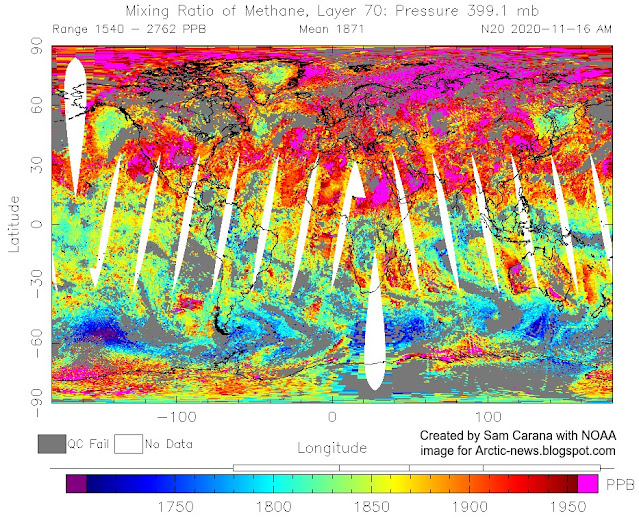 As the image below shows, the MetOp-1 satellite recorded a peak methane level of 2725 ppb on the afternoon of November 18, 2020.

The video below shows a methane plume or bubble cloud spotted by a team of 69 scientists from ten countries documenting bubble clouds rising from a depth of around 300 metres (985ft) along a 150km (93 mile) undersea slope in the Laptev Sea.
The danger is that even more hot and salty water will reach the shallow parts of the Arctic Ocean that contain huge amounts of methane in the form of hydrates and free gas in sediments at the seafloor, resulting in huge eruptions of methane that, on its own, could almost instantly cause the 1200 ppm CO₂e cloud feedback tipping point to be crossed, which can cause global temperatures to rise by 8°C.
The situation is dire and calls for comprehensive and effective action, as discussed in the Climate Plan.