Fracturing of the Jet Stream

Earlier this month, the jet stream was forecast to move over the Arctic Ocean north of Siberia on July 8, 2015, 12:00 UTC, in one, strong, long stream of wind, as discussed in the previous post and depicted below.

The situation has meanwhile been adjusted in a more recent forecast. This recent forecast shows the jet stream getting fractured over Siberia on July 8, 2015, 12:00 UTC, resulting in a sequence of vertical wind streams. This is a new development, rather unknown to the forecasting model that works on the basis of the jet stream flowing horizontally in one strong and narrow stream around the globe. 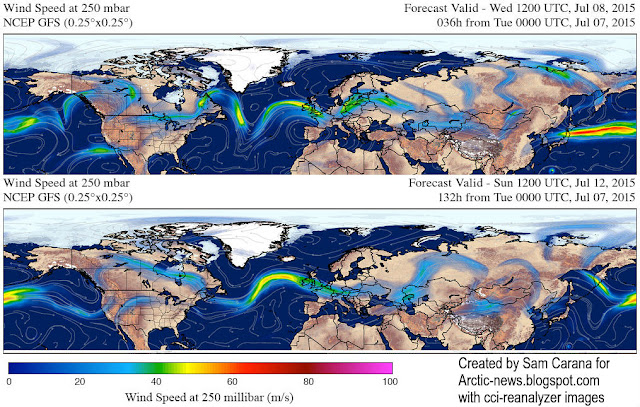 A further forecast has been added in the bottom panel, i.e. for July 12, 2015, 12:00 UTC, showing the jet stream moving well over the Arctic Ocean in two places, over the East Siberian Sea and over the Canadian Archipelago.

Fracturing of the jet stream and alignment along longitude, rather than latitude, is a worrying development. It is the most extreme form of what is described at Feedbacks in the Arctic as the "Open Doors" feedback or feedback #10, a feedback that makes it easier for warm air to move into the Arctic and for cold air move out of the Arctic, each of which will further contribute to a smaller temperature difference between the Equator and the North Pole, thus further changing the jet stream, in a self-reinforcing spiral.

The jet stream used to act as a barrier, keeping cold air in the Arctic and keeping temperate air in the temperate zone. As the jet stream fractures, more extreme weather - including more intense heatwaves - can be expected.

The result is further acceleration of warming in the Arctic, due to direct sunlight, due to warm wind carried north as the jet stream changes, due to warm water from rivers flowing into the Arctic Ocean, due to soot from wildfires settling on the snow and ice, causing their further demise, etc. 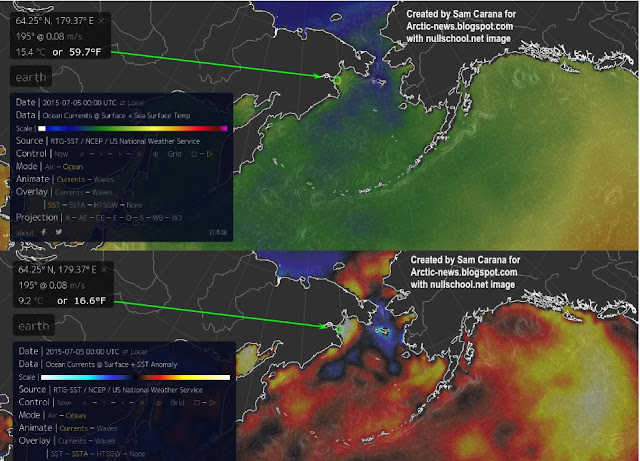 The image below also shows the impact of warm water from rivers in Alaska. Major melting took place on St Lawrence Island, as evident by the low sea surface temperatures around the Island on July 2, 2015 (left panel), while by July 6, 2015, much of this colder water had mixed with the warmer water moving up the Bering Strait from the Pacific Ocean and with the warm river water from Siberia and Alaska. 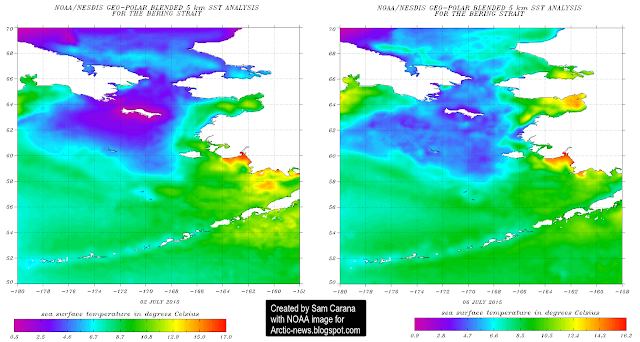 The image below shows sea surface temperatures in the Arctic as at July 7, 2015. 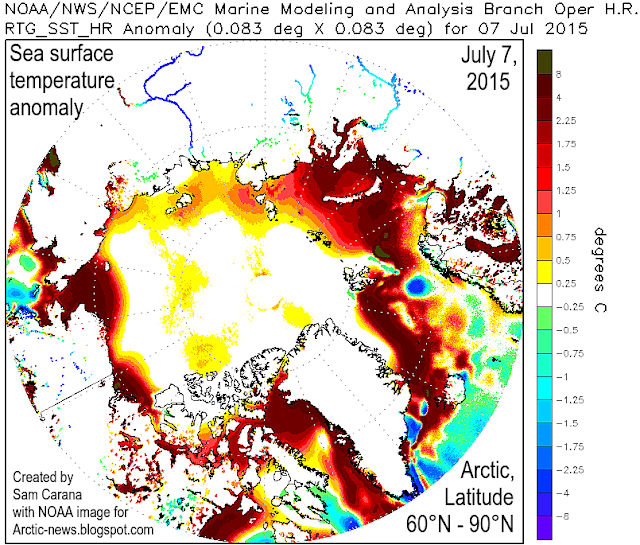 With ocean heat at very high levels, the danger is that, as temperatures keep rising, further methane hydrates will get destabilized and further amounts of methane will be released in the Arctic. High methane levels have already been showing up for years over the Arctic Ocean, indicating that methane releases from the seafloor of the Arctic Ocean are already taking place. 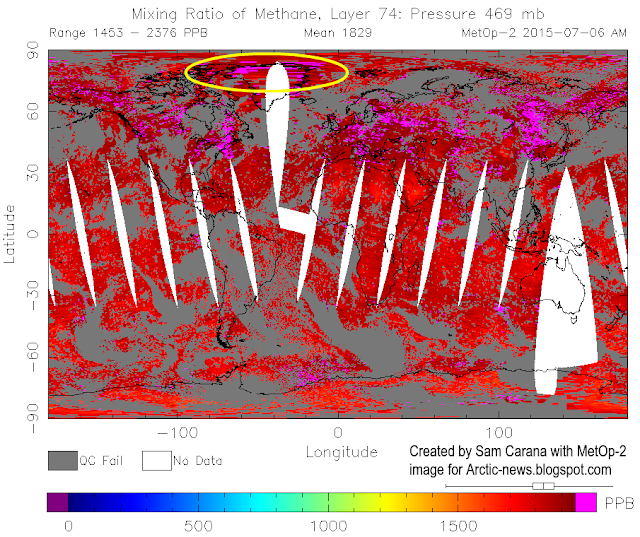 Above image shows that, on July 6, 2015, high methane levels show up north of Greenland (yellow oval). This could be a result of the heavy melting that is taking place on Greenland, exposing methane hydrates contained in the ice there. Hydrate destabilization on Greenland is discussed as feedback#21 at Feedbacks in the Arctic. Loss of ice mass on Greenland has fallen dramatically over the years and looks set to get even worse, as illustrated by the image below.

Sea surface temperatures in the Arctic as at July 7, 2015. http://arctic-news.blogspot.com/2015/07/fracturing-of-the-jet-stream.html
Posted by Sam Carana on Wednesday, July 8, 2015