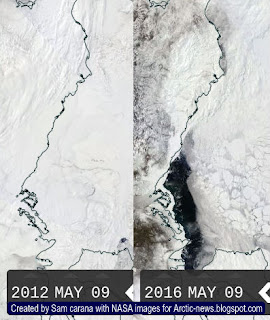 The image on the right compares the Beaufort Sea and the northern part of Alaska between May 9, 2012 and May 9, 2016. As the image illustrates, there now is a lot less ice and snow cover than there was on 2012.

The situation looks set to deteriorate further over the coming months. The image below shows temperature forecast to reach anomalies as high as 5.19°C or 9.34°F for the Arctic as a whole (forecast for May 19, 2016, 0300 UTC), with temperature anomalies at the top end of the scale forecast for Alaska and eastern Siberia. 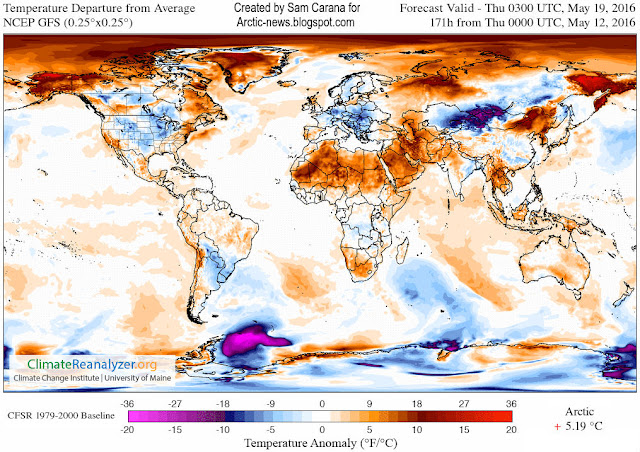 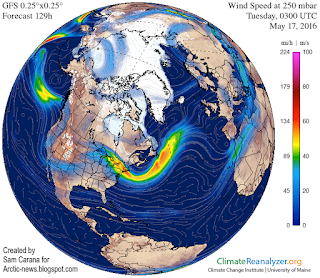 These temperature anomalies go hand in hand with a very wavy jet stream, as illustrated by the image on the right, showing loops extending all the way over the Arctic Ocean (in particular over the Beaufort Sea), taking along warm air in their path.

At the same time, the jet stream can extend far south at other places, making that cold air is moving south, out of the Arctic.

The result is a rapidly warming Arctic, which in turn makes the jet stream even more wavier, as one out of numerous feedbacks that are all  hitting the Arctic at the same time. 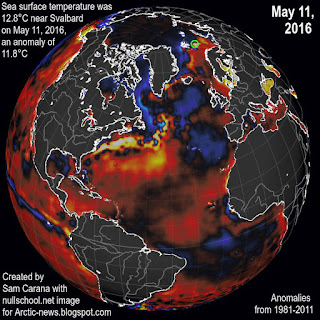 Sea surface temperatures in the Arctic Ocean are higher than they used to be, in particular in the Bering Strait, the Beaufort Sea, in Baffin Bay and the Kara Sea.

In summary, Arctic sea ice is in a very bad shape, while ocean heat is very high and rising. Greenhouse gas levels are at record high levels, as discussed in an earlier post and as further illustrated by the image below. 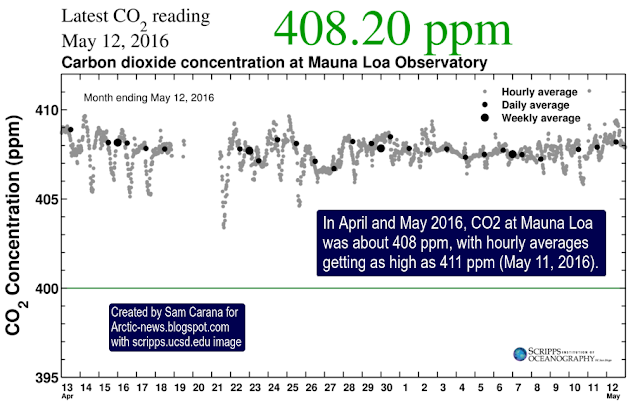 The image below shows that, over the past 365 days, warming over the Arctic have been much stronger than over the rest of the world. Air temperature anomalies of more than 2.5°C (4.5°F) show up over most of the Arctic Ocean. Furthermore, as discussed above, high temperatures are forecast to hit the Arctic over the next week. 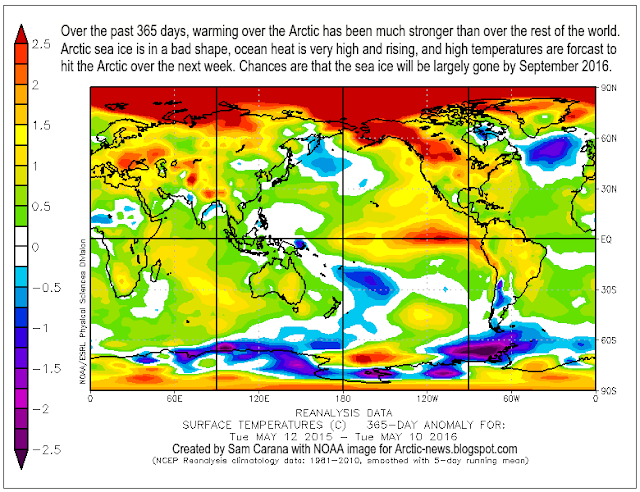 Given the above, chances are that the sea ice will be largely gone by September 2016.
The situation is dire and calls for comprehensive and effective action, as described in the Climate Plan.