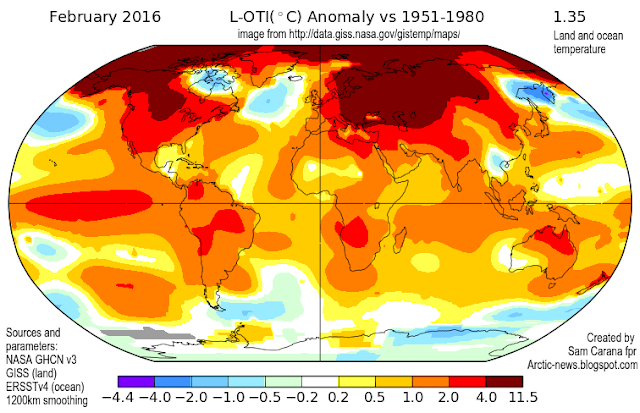 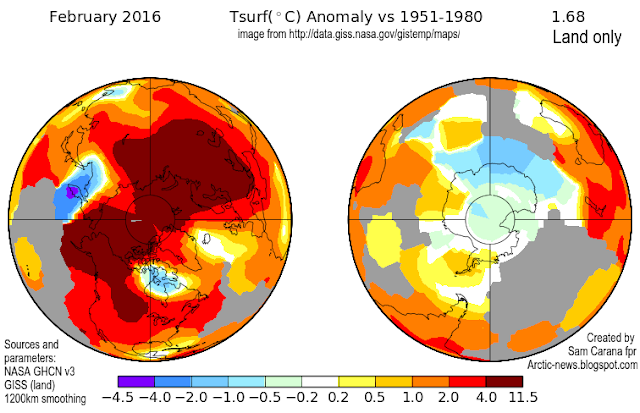 The image below combines the above two figures in two graphs, showing temperature anomalies over the past two decades. 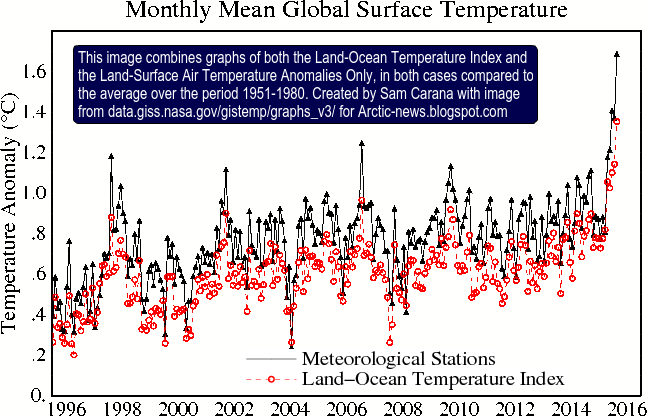 Below are the full graphs for both the land-ocean data and the land-only data. Anomalies on land during the period 1890-1910 were 0.61°C lower compared to the period from 1951 to 1980, which is used as a reference to calculate anomalies. The blue line shows land-ocean data, while the red line shows data from stations on land only. 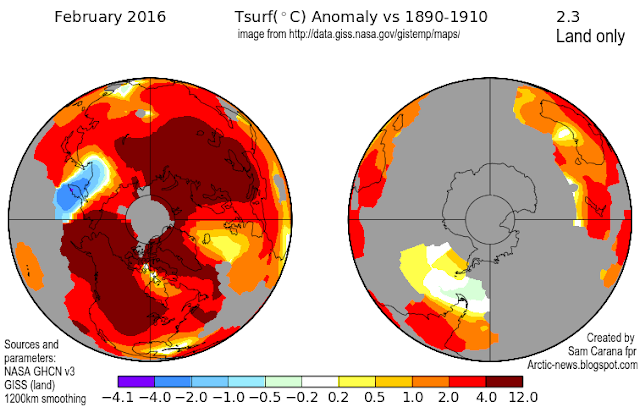 There are a number of elements that determine how much the total temperature rise on land will be, say, a decade from now: 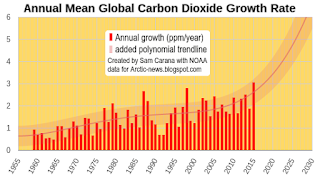 Rise 2016-2026: If levels of carbon dioxide and further greenhouse gases do keep rising, there will additional warming over the next ten years. Even with dramatic cuts in carbon dioxide emissions, temperatures can keep rising, as maximum warming occurs about one decade after a carbon dioxide emission, so the full wrath of the carbon dioxide emissions over the past ten years is still to come. Moreover, mean global carbon dioxide grew by 3.09 ppm in 2015, more than in any year since the record started in 1959, prompting an earlier post to add a polynomial trendline that points at a growth of 5 ppm by 2026 (a decade from now). This growth took place while global energy-related CO2 emissions have hardly grown over the past few years, indicating that land and oceans cannot be regarded as a sink, but should be regarded as source of carbon dioxide. On land, carbon dioxide may be released due to land changes, changes in agriculture, deforestation and extreme weather causing droughts, wildfires, desertification, erosion and other forms of soil degradation. Importantly, this points at the danger that such emissions will continue to grow as temperatures keep rising. New studies on permafrost melt (such as this one and this one) show that emissions and temperatures can rise much faster in the Arctic than previously thought. Furthermore, a 2007 study found a 25% soil moisture reduction to result in 2°C warming. Altogether, the rise over the next decade due to such emissions may be 0.2°C or 0.36°F (low) to 0.5°C or 0.9°F (high). 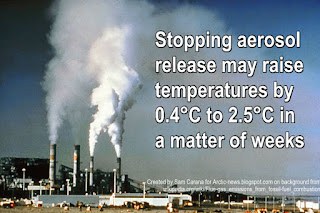 Removal of aerosols: With the necessary dramatic cuts in emissions, there will also be a dramatic fall in aerosols that currently mask the full warming of greenhouse gases. From 1850 to 2010, anthropogenic aerosols brought about a decrease of ∼2.53 K, says a recent paper. In addition, more aerosols are likely to be emitted now than in 2010, so the current masking effect of aerosols may be even higher. Stopping aerosol release may raise temperatures by 0.4°C or 0.72°F (low) to 2.5°C or 4.5°F (high) over the next decade, and when stopped abruptly this may happen in a matter of weeks.

Albedo change: Warming due to Arctic snow and ice loss may well exceed 2 W per square meter, i.e. it could more than double the net warming now caused by all emissions by people of the world, as Professor Peter Wadhams calculated in 2012. The temperature rise over the next decade due to albedo changes as a result of permafrost and sea ice decline may be 0.2°C or 0.36°F (low) to 1.6°C or 2.9°F (high). 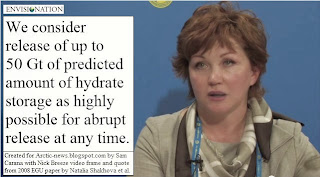 Methane eruptions from the seafloor: ". . . we consider release of up to 50 Gt of predicted amount of hydrate storage as highly possible for abrupt release at any time," Dr. Natalia Shakhova et al. wrote in a paper presented at EGU General Assembly 2008. Authors found that such a release would cause 1.3°C warming by 2100. Such warming from an extra 50 Gt of methane seems conservative when considering that there now is only some 5 Gt of methane in the atmosphere, and over a period of ten years this 5 Gt is already responsible for more warming than all the carbon dioxide emitted by people since the start of the industrial revolution. The temperature rise could be higher, especially in case of large abrupt release, but in case of small and gradual releases much of the methane may be broken down over the years. The temperature rise due to seafloor methane over the next decade may be 0.2°C or 0.36°F (low) to 1.1°C or 2°F (high).
Water vapor feedback: "Water vapour feedback acting alone approximately doubles the warming from what it would be for fixed water vapour. Furthermore, water vapour feedback acts to amplify other feedbacks in models, such as cloud feedback and ice albedo feedback. If cloud feedback is strongly positive, the water vapour feedback can lead to 3.5 times as much warming as would be the case if water vapour concentration were held fixed", according to the IPCC. In line with the above elements, this may result in a temperature rise over the next decade of 0.2°C or 0.36°F (low) to 2.1°C or 3.8°F (high).
The image below puts all these elements together in two scenarios, one with a relatively low temperature rise of 3.9°C (7.02°F) and another one with a relatively high temperature rise of 10.4°C (18.72°F). 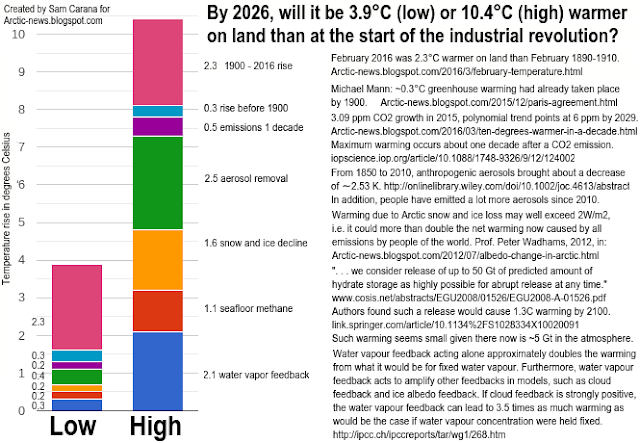 Note that the above scenarios assume that no geoengineering will take place. 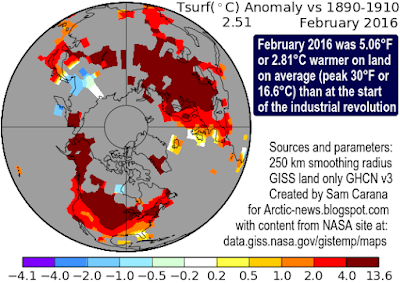 The 2.3°C warming used in above image isn't the highest figure offered by the NASA site. An even higher figure of 2.51°C warming can be obtained by selecting a 250 km smoothing radius for the on land data.
When adding the 0.3°C that temperatures rose before 1900, the rise from the start of the industrial revolution is 2.81°C (5.06°F), as illustrated by the image on the right.
The image also shows that this is the average rise. At specific locations, it is as much as 16.6°C (30°F) warmer than at the start of the industrial revolution.
Furthermore, temperatures are higher on the Northern Hemisphere than on the Southern Hemisphere. This is illustrated by the image below showing NASA temperature anomalies for January 2016 (black) and February 2016 (red) on land on the Northern Hemisphere. The data show that it was 2.36°C (4.25°F) warmer in February 2016 compared to 1951-1980.

How much of the rise can be attributed to El Niño? The added trendlines constitute one way to handle variability such as caused by El Niño and La Niña events and they can also indicate how much warming could be expected to eventuate over the years to come.
The February trendline also indicates that the temperature was 0.5°C lower in 1900 than in 1951-1980, so the total rise from 1900 to February 2016 is 2.86°C (5.15°F). Together with a 0.3°C rise before 1900, this adds up to a rise on land on the Northern Hemisphere of 3.16°C (5.69°F) from pre-industrial levels to February 2016. Most people on Earth live on land on the Northern Hemisphere. In other words, most people are already exposed to a temperature rise that is well above any guardrails that nations at the Paris Agreement pledged would not be crossed. 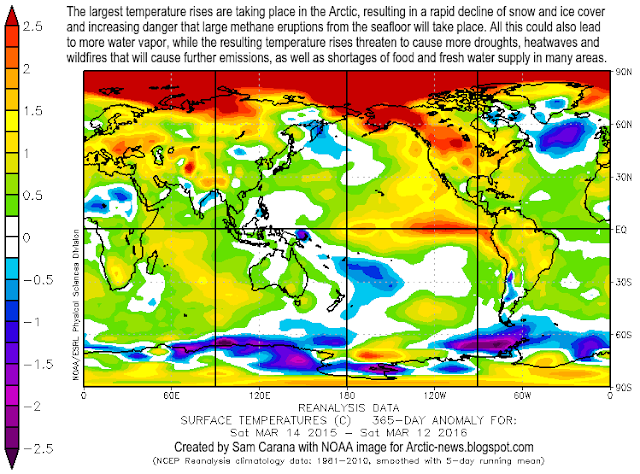 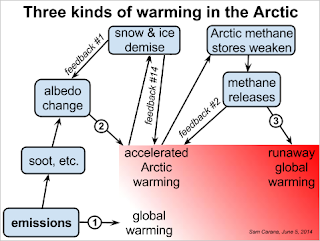 Temperatures may actually rise even more rapidly than these trendlines indicate. As above image illustrates, the largest temperature rises are taking place in the Arctic, resulting in a rapid decline of snow and ice cover and increasing danger that large methane eruptions from the seafloor will take place, as illustrated by the image on the right, from an earlier post. This could then further lead to more water vapor, while the resulting temperature rises also threaten to cause more droughts, heatwaves and wildfires that will cause further emissions, as well as shortages of food and fresh water supply in many areas.

Adding the various elements as discussed above indicates that most people may well be hit by a temperature rise of 4.46°C or 8.03°F in a low rise scenario and of 10.96°C or 19.73°F in a high rise scenario, and that would be in one decade from February 2016. Since it is now already March 2016, that is less than ten years from now.

The image below shows highest mean methane readings on one day, i.e. March 10, over four years, i.e. 2013, 2014, 2015 and 2016, at selected altitudes in mb (millibar). The comparison confirms that the increase of methane in the atmosphere is more profound at higher altitudes, as discussed in earlier posts. This could indicate that methane from the Arctic Ocean is hardly detected at lower altitudes, as it rises in plumes (i.e. very concentrated), while it will then spread and accumulate at higher altitudes and at lower latitudes. 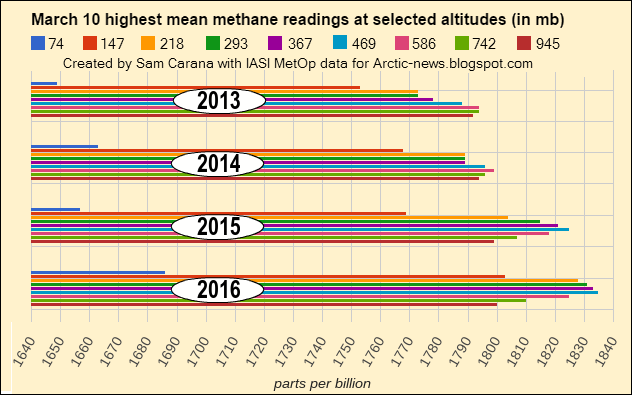 The conversion table below shows the altitude equivalents in mb, feet and m.

Meanwhile Arctic sea ice area remains at a record low for the time of the year, as illustrated by the image below. 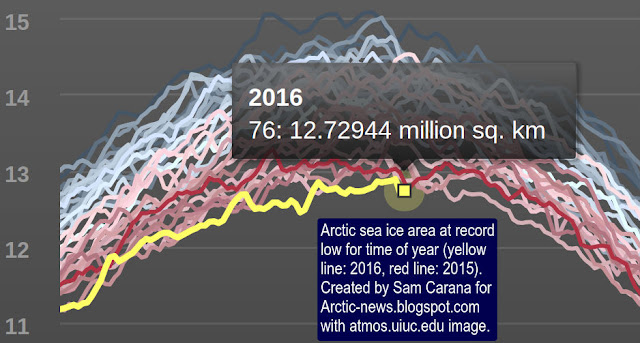 Next to rising surface temperatures in the Arctic, ocean temperature rises on the Northern Hemisphere also contribute strongly to both Arctic sea ice decline and methane releases from the seafloor of the Arctic Ocean, so it's important to get an idea how much the Northern Hemisphere ocean temperature can be expected to rise over the next decade. The NOAA image below shows a linear trend over the past three decades that is rising by 0.19°C per decade. 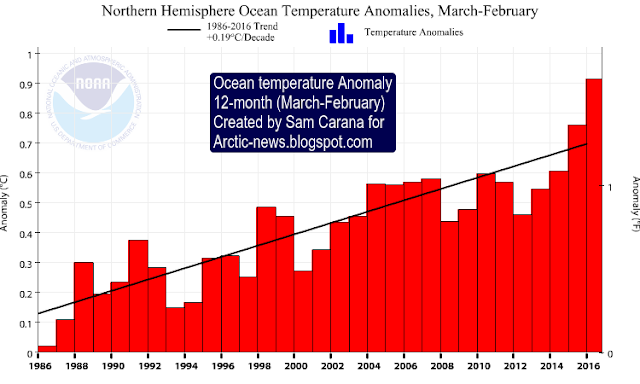 The image below, using the same data, shows a polynomial trend pointing at a 1.5°C rise in ocean temperature on the Northern Hemisphere over the next decade.

Below is another version of above graph. 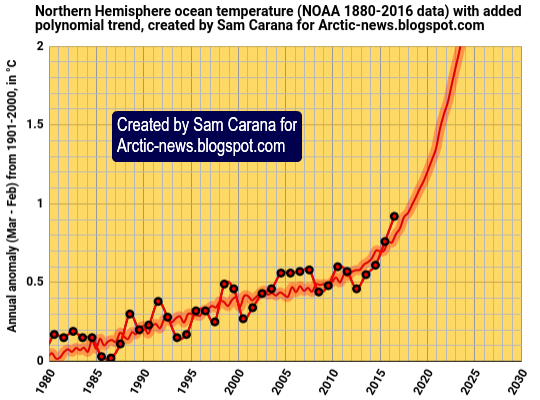