Arctic sea ice area is in steep descent, as illustrated by the image below. Sea ice area was only smaller at this time of the year in 2007, for all years for which satellite data are available.

Earlier this year, on March 9, 2014, Arctic sea ice area was at a record low for the time of the year. Since then, area did show some growth for a while, to the north of Scandinavia. This growth could be attributed largely to strong winds that made the sea ice spread with little or no growth in volume. The 30-day Naval Research Laboratory animation below shows recent sea ice speed and drift.

Indeed, sea ice volume in March 2014 was the 2nd lowest on record. Only March 2011 had a lower volume as discussed in a recent post. The 30-day Naval Research Laboratory animation below shows recent sea ice thickness.

Low sea ice volume and area jointly suggest there could be a total collapse of the sea ice later this year, in line with observation-based non-linear trends. For years, this blog has warned that observation-based projections point at Arctic sea ice disappearance within years, with dire consequences for the Arctic and for the world at large.

As said, winds are responsible for much of sea ice variability, and winds could either slow down or speed up such a collapse. On this point, it's good to remember what Prof. Peter Wadhams said in 2012:


". . apart from melting, strong winds can also influence sea ice extent, as happened in 2007 when much ice was driven across the Arctic Ocean by southerly winds. The fact that this occurred can only lead us to conclude that this could happen again. Natural variability offers no reason to rule out such a collapse, since natural variability works both ways, it could bring about such a collapse either earlier or later than models indicate. 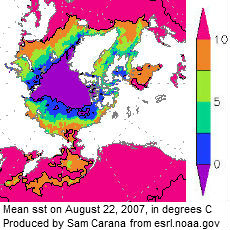 
In shallow waters, heat can more easily reach the bottom of the sea. In 2007, strong polynya activity caused more summertime open water in the Laptev Sea, in turn causing more vertical mixing of the water column during storms in late 2007, found a 2011 study, and bottom water temperatures on the mid-shelf increased by more than 3°C (5.4°F) compared to the long-term mean.

Another study found that drastic sea ice shrinkage causes increase in storm activities and deepening of the wind-wave-mixing layer down to depth ~50 m (164 ft) that enhance methane release from the water column to the atmosphere. Indeed, the danger is that heat will warm up sediments under the sea, containing methane in hydrates and as free gas, causing large amounts of this methane to escape rather abruptly into the atmosphere.

Such warming would come on top of ever-warmer water that is carried by the Gulf Stream into the Arctic Ocean and that has already been blamed for large methane releases from the seafloor of the Arctic Ocean last year.

The prospect of an El Niño event, as discussed in an earlier post, makes the situation even more dire.

The consequences of sea ice collapse will be devastating, as all the heat that previously went into transforming ice into water will be asbsorbed by even darker water, from where less sunlight will be reflected back into space. The danger is that further warming of the Arctic Ocean will trigger massive methane releases that could lead to extinction at massive sclae, including extinction of humans.

Hopefully, more people will realize the urgency of the situation and support calls for comprehensive and effective action as discussed at the Climate Plan blog.

- Has the Descent begun?
http://arctic-news.blogspot.com/2014/03/has-the-descent-begun.html