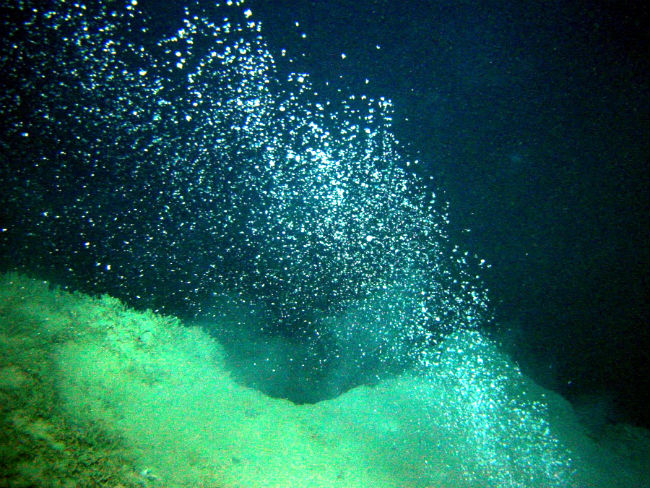 
Background of rebuttal author -
Peter Wadhams Sc.D. is Professor of Ocean Physics at the University of Cambridge in the UK. He is an oceanographer and glaciologist involved in polar oceanographic and sea ice research and concerned with climate change processes in the polar regions He leads the Polar Ocean Physics group studying the effects of global warming on sea ice, icebergs and the polar oceans. This involves work in the Arctic and Antarctic from nuclear submarines, autonomous underwater vehicles (AUVs), icebreakers, aircraft and drifting ice camps. He has led over 40 polar field expeditions. His full background is available here: University of Cambridge DAMTP: Professor Peter Wadhams


In a Jan. 4 post on "Real Climate" (1), David Archer addressed those who are raising concern about the speed of ice loss in the Arctic and the resultant potential for warming water temperatures to thaw frozen methane and release it as gas to the atmosphere. In essence, he dismissed such concern as a form of unfounded alarmism making "much ado about nothing". In this rebuttal, I would like to respectfully challenge this dismissive stance and assert that severe dangers are arising in the Arctic which instead call for the full attention of humanity.

The present thinning and retreat of Arctic sea ice is one of the most serious geophysical consequences of global warming and is causing a major change to the face of our planet. A challenging characteristic of the behaviour is that both the rate of retreat (especially in summer) and the rate of thinning in all seasons have greatly exceeded the predictions of most models. The sea ice cover of the Arctic Ocean, particularly in summer, has been in retreat since the 1950s at a rate of about 4% per decade which has recently increased to 10% per decade. More seriously, the thickness of the ice has diminished.

Satellites can track ice area, but ice thickness distribution can be most accurately measured by sonar from underneath the ice. Since 1971, I have been going to the Arctic in UK nuclear submarines, mapping the ice thickness using upward-looking sonar along the vessel’s track. U.S. submarines have also allowed such availablity. Opening these submarines to scientific work has been a marvelous service to climate research. It was thanks to submarines that I was able to show for the first time that the ice in the Arctic is thinning (in a 1990 paper in Nature (2), showing a 15% thickness loss in 11 years), and recent work from UK and US submarines now shows a loss of more than 43% in thickness between the 1970s and 2000s, averaged over the ocean as a whole (3). This is an enormous loss – nearly half of the ice thickness – and has changed the whole appearance of the ice cover. Most of the ice is now first-year rather than the formidable multi-year ice which used to prevail.


The thinning is caused by a mixture of reduced growth in winter, because of warmer temperatures and more heat in the underlying water column, and greater melt in summer. A change in the direction and speed of ice motion has also played a role, with the ice departing quicker from the Arctic Basin through Fram Strait rather than circulating many times inside the Arctic.

The summer (September) area of sea ice reached a record low in 2007, almost matched in 2011, but what is most serious is that the thinning continues. It is inevitable that very soon there will be a downward collapse of the summer area because the ice will just melt away. Already in 2007, measurements indicated that during the summer there were 2 metres of melt off the bottom of of ice floes in the Beaufort Sea, while the neighbouring first-year floes had only reached in 1.8 metres during winter – so all first-year ice was disappearing. This effect will become more important and will spread throughout the Arctic Basin.

There is currently disagreement about when the summer Arctic will become completely ice-free. It depends on what model is being employed. My own view is based on purely empirical grounds, that is, matching the observations of area from satellites with observations from submarines (combined with some modelling) of thickness to give us ice volume. If we think in volume terms instead of area terms, the downward trend is more than linear, in fact it is exponential, and if extrapolated it gives us an ice-free summer Arctic as early as 2015.

Others have talked of later dates, like 2030-2040, but I do not see how the trend of summer ice volume can possible permit this. Those who agree include W Maslowsky, a leading ice modeller (Naval Postgraduate School, Monterey), and the PIOMAS project at University of Washington which generated the data shown below (4).

Minimum volume of Arctic sea ice in midsummer, based on areas observed from satellites and thickness trends inferred from submarine observations. Extrapolation leads to a zero volume in 2015. It must be pointed out that this perspective stands in direct contradiction to very complacent statements about the Arctic sea ice from the IPCC in the AR4 report of April 2007 saying the sea ice was very likely to last beyond the end of the century.

The ice retreat is having major impact on the planet. The Arctic is the most rapidly warming region on Earth. It has become widely accepted that Arctic amplification of global warming is due to the albedo effect of sea ice retreat. The increased open water reduces the albedo (fraction of solar radiation reflected into space) and causes warming at high northern latitudes to be 2-4 times as fast as in the tropics, with enormous implications for climatic instability. Secondly, the summer retreat of the ice from the wide Arctic continental shelves (particularly the East Siberian Sea) allows the shallow surface layer to warm up, bringing temperatures of up to 5 degrees C right down to the seabed.

Quantification of this affect has only very recently been attempted, in a paper to the 2011 AGU by Hudson (5). The startling conclusion is that the rate of warming of the Arctic could double or triple, once the Arctic Ocean is ice-free in September. And it could double or triple again, once the ocean is ice-free for half the year. But the timescale makes this all the more worrying.

The scientific community has drawn attention to the risk of dangerous climate change if the world does not reduce emissions of carbon dioxide - a worthy and critical objective. However, I wish to point toward a much more immediate problem that does not seem to be recognised among the climate change community at large: This is the problem of rapid retreat of Arctic sea ice, and likely consequence of catastrophic methane feedback.

These rapidly warming temperatures are accelerating the melt of offshore permafrost, releasing methane trapped as methane hydrates and causing large plumes of methane to appear all over the summer Arctic shelves (observed for the last 2-3 summers by Semiletov and colleagues on joint University of Alaska – Far Eastern Research Institute cruises). Methane levels in the Arctic atmosphere have started to rise (measured by Dr Leonid Yurganov, Johns Hopkins University) after being stable for some years. As methane is a very powerful, if short lived, greenhouse gas, this will give a strong upward kick to global warming.


"We carried out checks at about 115 stationary points and discovered methane fields of a fantastic scale - I think on a scale not seen before.... This is the first time we've found continuous, powerful and impressive seeping structures more than 1,000 meters in diameter." (6)

Semiletov has also described how warmer temperatures are making their way down to the bottom of the shallow seabeds in the Arctic continental shelves:


"When ice has gone, there are stronger winds and waves and a deeper mixing of water which causes the comparatively warm upper layer to mix with water at deeper levels. There are already studies which confirm that in some areas, bottom temperature in summer is 2 to 3 degrees above zero celsius (freezing). As this warming spreads to a larger area, the more that shelf-based permafrost will thaw." (7)

There have been warnings that a major methane outbreak may be imminent.

In a piece Archer co-authored in 2009, he acknowledged both the significant warming power of methane and the fragile and "intrinsically vulnerable" nature of hydrates:


"There are concerns that climate change could trigger significant methane releases from hydrates and thus could lead to strong positive carbon–climate feedbacks. .... Methane hydrate seems intrinsically vulnerable on Earth nowhere at the Earth's surface is it stable to melting and release of the methane." (8)

In this same piece, Archer affirms another key factor:

Archer clearly acknowledges the vulnerability of methane hydrates to thawing in response to rising Arctic temperatures. Given that ice loss is accelerating, which in turn will only accelerate that temperature rise through the albedo effect, one has to wonder why he does not perceive an imminent and urgent crisis. Ira Leifer - methane specialist at the Marine Science Institute at Univ. of Calif - Santa Barbara - describes the mechanics of a "runaway" methane feedback:


"A runaway feedback effect would be where methane comes out of the ocean into the atmosphere leading to warming, leading to warmer oceans and more methane coming out, causing an accelerated rate of warming in what one could describe as a runaway train." (9)

Given that this "train" would be one way and feed upon itself in a way that might well be unstoppable by humanity, it would seem to be a classic case where the precautionary principle should immediately be invoked. When Archer dismisses the legitimate concern that conditions in the Arctic are approaching a potentially catastrophic tipping point, he is deflecting away a vitally important perspective that needs to be communicated to the world's policymakers. I strongly urge Archer to re-consider his position.

It is also my understanding that one of the recipients of Archer's "dismissal" charge was documentary film-maker Gary Houser. Houser had submitted an earlier rebuttal to Archer - based on his interviews with scientists related to a program on the issue of Arctic methane - which was rejected by "Real Climate" on the grounds that he himself is not an accredited scientist. I have read his rebuttal and wish to link to it here (10), as I believe it contains points of merit I do not have space to address here.