Aerosols have a strong impact on climate, in particular sulfate and black carbon.

As above image shows, aerosols result from burning fuel in industrial processes and transport, and for purposes of heating or lighting buildings (such as with woodburners, furnaces, stoves, candles, oil lamps and open fireplaces) or for preparing food and boiling water. Aerosols can also be caused by open fires that can be lit to make charcoal, burn waste, turn forests into pasture, etc. Global warming increases the fire danger (i.e. in frequency, intensity, duration and size) and thus emissions from both forest fires and controlled open fires (backburning and reducing waste).

A 2008 study by Ramanathan et al. mentions figures from other studies for the radiative forcing (RF) of black carbon, i.e. figures ranging from 0.4 Watts per square meter (W/m²) to 1.2 W/m². A 2013 study by Bond et al. calculates that black carbon has a warming effect of about 1.1 W/m². Above image highlights this figure of 1.1 W/m² of radiative forcing (RF), while warning that RF could be as high as 2.1 W/m². In addition to black carbon, sulfur dioxide (SO₂) has an important impact, as discussed in the box below.

The lifetime of BC, SO₂ and CH₄ is much shorter than the lifetime of CO₂. Therefore, the changes by BC, CH₄ and SO₂ to temperature are felt much more strongly when using a shorter timespan.

Over a 10-year period, CH₄ produces more warming than CO₂, while BC is not far behind. As discussed in above box, SO₂ partly masks the warming by other emissions by people. For more on the warming impact of methane, also see this page. 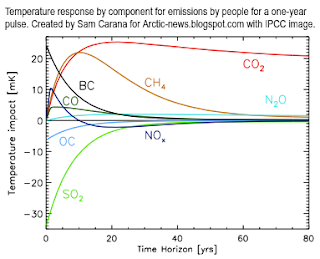 The temperature impact for a one-year pulse of the various emissions by people is depicted on the image on the right.

The danger is that this masking effect will fall away, while warming will additionally increase, due to more emissions that have a strong immediate warming effect such as black carbon. If the masking effect resulting from sulfur dioxide emissions were to fall away, warming would increase by as much as 2.7 W/m², according to IPCC AR4 figures, and even more according to some other studies.

Imagine a scenario in which many people stopped burning fossil fuels for energy, including for heating, cooking and lighting. That would be great, but when many of them instead switched to burning biomass in woodburners (stoves, heaters and fireplaces, for heating, preparing food and boiling water) and in open fires, while also burning more forests to create more pasture for grazing, and while burning more waste in the absence of appropriate waste management, the net warming (due to increased black carbon and brown carbon) could be a lot higher, especially when combined with a strong increase in forest fires.

Indeed, in the absence of comprehensive and effective government policies, further warming could result as the sulfate masking effect fell away (due to an absence of sulfates that are now co-emitted with fossil fuel burning) and as people started to burn more biomass in woodburners and open fires (instead of using fossil fuel).

Waste disposal is another source of aerosols. One study estimates that as much as 29% of global anthropogenic emissions of small particulate matter comes from trash fires. Furthermore, as said, there could be more burning of forests to create more pasture for grazing and as a way to prevent wildfires (backburning and controlled fires), and a further rise in the frequency, intensity, duration and size of wildfires as the weather gets more extreme. 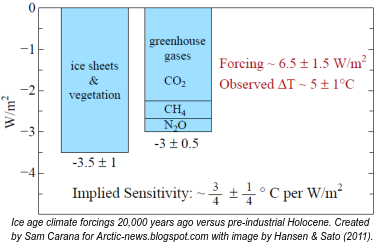 The danger is that, in the absence of appropriate policies, there will be much further warming, due to albedo changes and due to greenhouse gases such as water vapor, carbon dioxide (CO₂), methane (CH₄) and nitrous oxide (N₂O).

The danger is that, at the same time, other emissions will increase that have a huge immediate warming effect, such as black carbon (BC), brown carbon (BrC), carbon monoxide (CO) and nitrogen oxides (NOx), in particular nitric oxide (NO) and nitrogen dioxide (NO₂), jointly resulting in a strong net additional radiative forcing.

In a recent paper by James Hansen and in an earlier paper by Hansen & Sato (2011), a sensitivity of ¾°C per W/m² is used (see images on the right).

Another recent paper suggest that the temperature rise per W/m² could be even stronger. A high-end short-term increase in net radiative forcing, combined with a strong temperature rise per W/m², could therefore cause a temperature rise as a result of changes in aerosols of as much as 2.5°C in a matter of years, as discussed in posts such as this one and this one, which features an image showing sulfur dioxide levels as high as 3597.10 µg/m³ in East Asia on October 24, 2018.

As above image illustrates, there is a huge variation in sulfur dioxide levels regionally, implying that some areas could be hit much more strongly by rising temperatures than others.

The image on the right shows IPCC (2000) projections for sulfur dioxide emissions, from the same earlier post.

Sulfur dioxide (SO₂) gets oxidized in the atmosphere to form sulfate aerosols (SO₄), which have a strong cooling effect.

As a result of the COVID-19 lockdowns, traffic and large parts of industrial activity have ground to a halt worldwide. Yet, despite this, sulfate levels can still be high, as illustrated by the image below which shows that τ, i.e. light at 550 nm as a measurement of aerosol optical thickness due to sulfate aerosols, was as high as 3.162 on March 30, 2020, at 11:00 UTC. 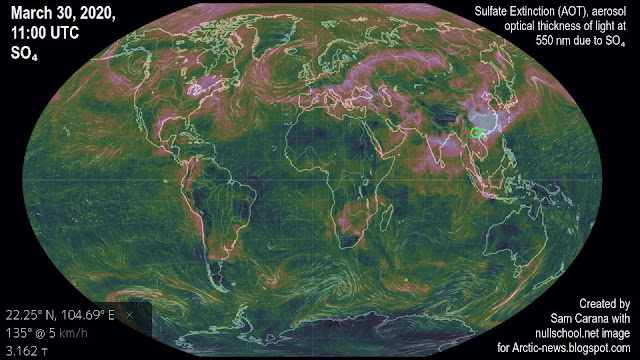 According to the IPCC AR5 (image on the right), the direct cooling impact of sulfate aerosols is as much as -0.62 W/m².

Additionally, sulfate aerosols strongly contribute to the impact of aerosol–cloud interactions, estimated in AR5 to provide as much as -1.2 W/m² cooling.

Besides sulfates, further aerosols contribute to aerosol–cloud interactions, such as dust aerosols.

According to AR5, dust has a direct impact of -0.1 W/m², while additionally contributing to aerosol–cloud interactions. When taking into account a 0.15 W/m² warming impact found to be caused by coarse dust, dust may well cause net warming, which is the more important since dust is likely to increase due to more fires, stronger winds and further desertification. 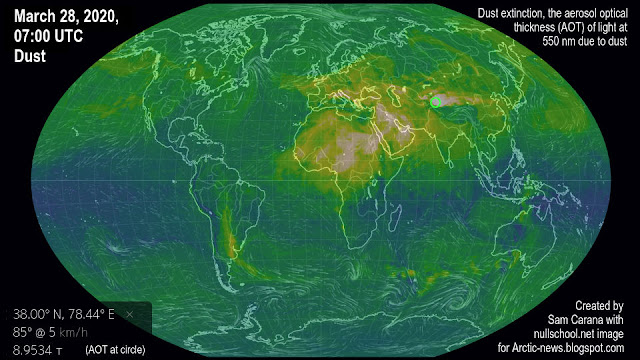 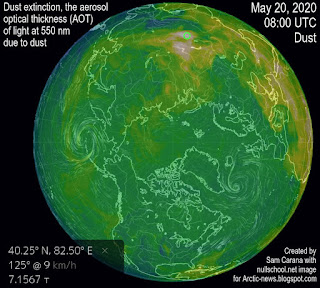 Furthermore, just like black carbon and brown carbon, dust can also cause snow and ice to darken, as it settles on snow and ice, and thus speed up sea ice decline and thawing of permafrost. Dust can carry nutrients that stimulate algae growth on snow and ice, thus causing further darkening, etc. 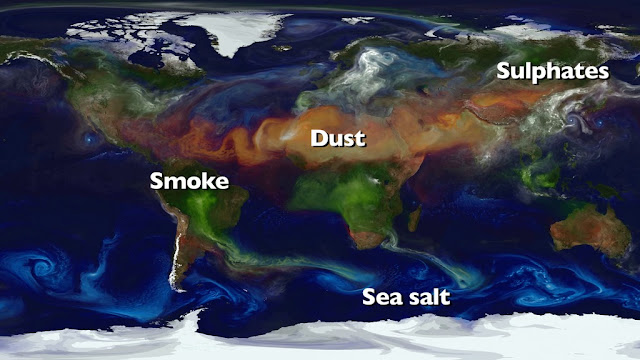 The NASA visualization above can be viewed here. The visualization below covers a period from August 2006 to April 2007, showing dust (orange), sea salt (blue), smoke (green), and sulfates (white).


The image below shows smoke from fires on August 23, 2018, together with dust and sea salt aerosols. 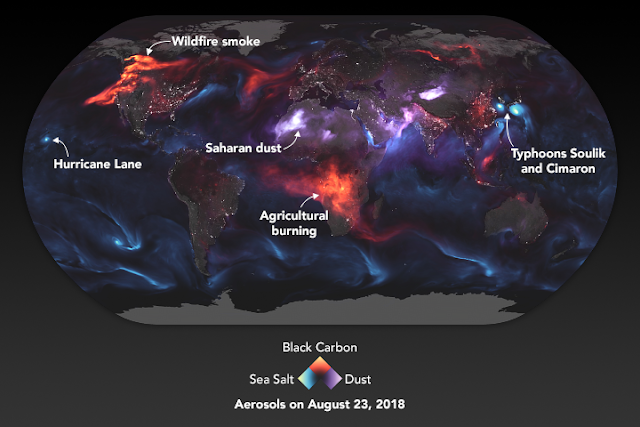 • The updated effective radiative forcing of major anthropogenic aerosols and their effects on global climate at present and in the future, by Zhang et al. (2016)
https://onlinelibrary.wiley.com/doi/10.1002/joc.4613/abstract

• The roles of aerosol direct and indirect effects in past and future climate change, Levy et al. (2013)
https://onlinelibrary.wiley.com/doi/10.1002/jgrd.50192/abstract

• We need to rethink everything we know about global warming
https://www.israel21c.org/we-need-to-rethink-everything-we-know-about-global-warming

• Black carbon larger cause of climate change than previously assessed (news release of above study)
http://www.igbp.net/news/pressreleases/pressreleases/blackcarbonlargercauseofclimatechangethanpreviouslyassessed.5.4910f0f013c20ff8a5f8000152.html

• For Air Pollution, Trash Is a Burning Problem
https://www.climatecentral.org/news/where-trash-is-a-burning-problem-17973

• Climate models miss most of the coarse dust in the atmosphere - by Adeyemi Adebiyi et al.https://advances.sciencemag.org/content/6/15/eaaz9507

• Abrupt Warming, how much and how fast?
https://arctic-news.blogspot.com/2017/05/abrupt-warming-how-much-and-how-fast.html