Keep in mind that above images show temperature anomalies from the 20th century average, which is NOAA's default baseline. As an earlier analysis points out, when using a 1750 baseline and when using ocean air temperatures and higher Arctic anomalies, we may have already crossed both the 1.5°C and the 2°C thresholds that politicians at the Paris Agreement pledged would not get crossed.


Currently, we are in a La Niña period, which suppresses air temperatures. Only a thin layer of sea ice is left in the Arctic, with extent almost as low as it was in 2012 around this time if year, as discussed in the previous post. When an El Niño event returns, things will get a lot worse. 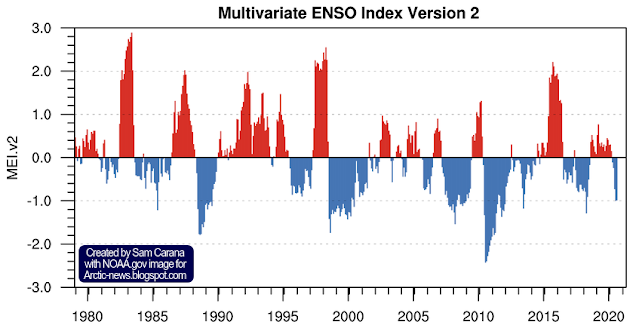 The temperature rise is strongest in the Arctic, as illustrated by the zonal mean temperature anomaly map below. The map shows anomalies as high as 4.83°C or 8.69°F in the Arctic. The North Pole is at the top of the map, at 90° North, the Equator is in the middle, at 0° and the South Pole is at the bottom, at -90° South. And yes, NASA's default baseline is 1951-1980, so anomalies are even higher when using a 1750 baseline. 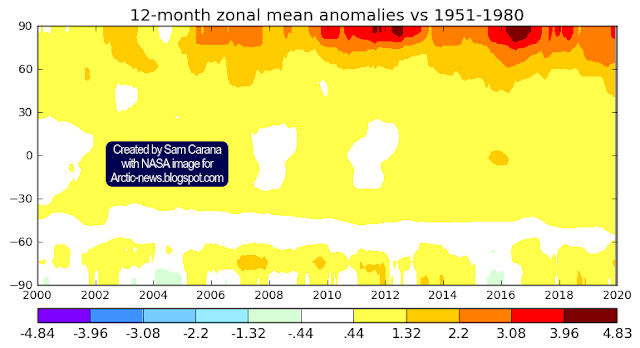 As said, there are further tipping points and feedbacks kicking in more strongly as they get crossed. At least ten tipping points apply to the Arctic, as discussed in an earlier post.