Wildfires are starting to break out in British Columbia, Canada. The wildfire on the image below started on May 1, 2016 (hat tip to Hubert Bułgajewski‎). 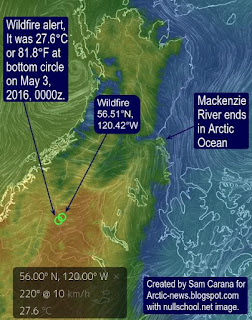 Moreover, winds can carry soot high up into the Arctic, where it can settle on the sea ice and darken the surface, which will make that more sunlight gets absorbed, rather than reflected back into space as before. 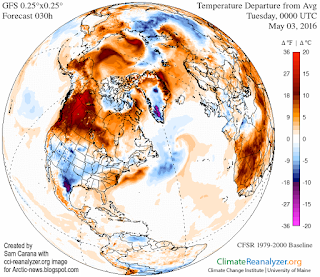 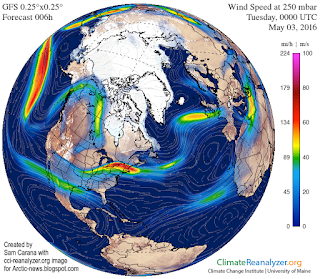 Extreme weather is becoming increasingly common, as changes are taking place to the jet stream. As the Arctic warms up more rapidly than the rest of the world, the temperature difference between the Equator and the North Pole decreases, which in turn weakens the speed at which the north polar jet stream circumnavigates the globe.

This is illustrated by the wavy patterns of the jet stream in the image on the right, showing the situation on May 3, 2016 (00:00 UTC), with a loop bringing warm air high up into North America and into the Arctic.

In conclusion, warm air reaching high latitudes is causing the sea ice to melt in a number of ways:
The situation doesn't appear to be improving soon, as illustrated by the image on the right. Following the record high temperatures that hit the world earlier this year, the outlook for the sea ice looks bleak.

Further decline of the snow and ice cover in the Arctic looks set to make a number of feedbacks kick in stronger, with methane releases from the seafloor of the Arctic Ocean looming as a huge danger.

Below is a comparison of temperatures and emissions for the two locations discussed above. Such fires are becoming increasingly common as temperatures rise, and they can cause release of huge amounts of carbon dioxide, carbon monoxide, methane, sulfur dioxide, soot, etc.


In the video below, Paul Beckwith discusses the situation.


Wildfires are also devastating other parts of the Earth. Below is an image showing wildfires over the Amur River on May 7, 2016. 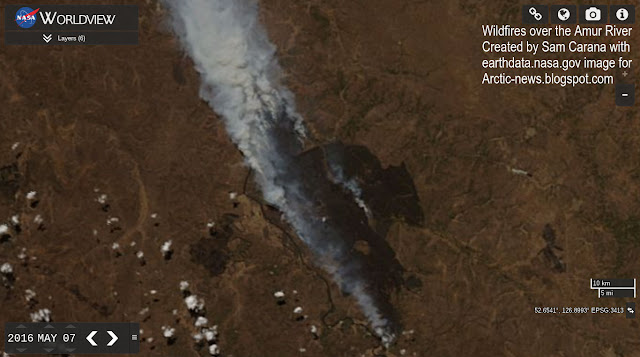 The image below shows carbon monoxide levels over the Amur River as high as 22,480 ppb on May 9, 2016. Hat tip to Grofu Antoniu for pointing at the CO levels. According to this Sputniknews report, a state of emergency was declared in the Amur Region as fires stretched across 12,200 acres. 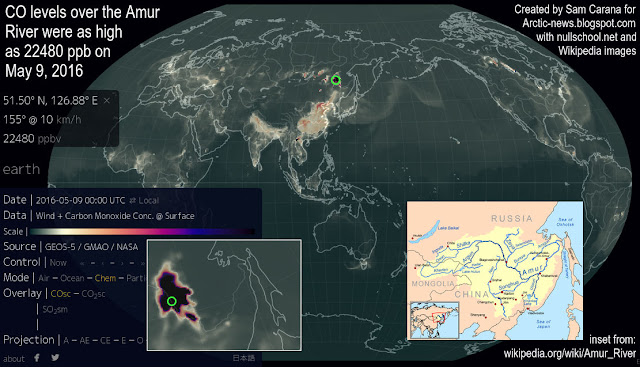 The video below shows carbon monoxide emissions in eastern Asia from May 1 to May 26, 2016.

Meanwhile, the National Snow and Ice Data Center (NSIDC) has resumed daily sea ice extent updates with provisional data. The image below is dated May 5, 2016, check here for updates. 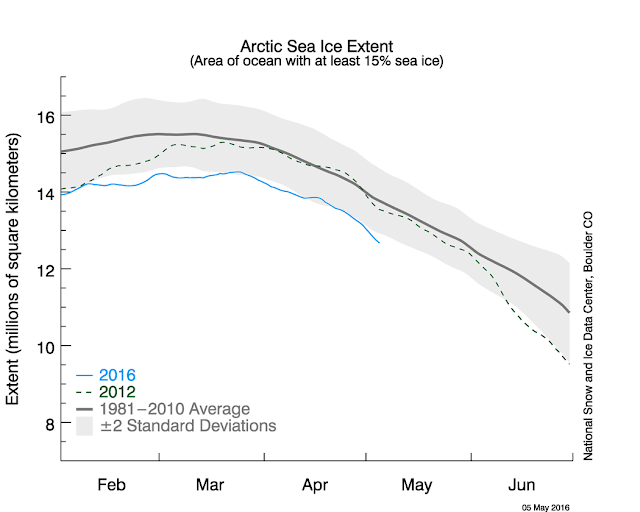 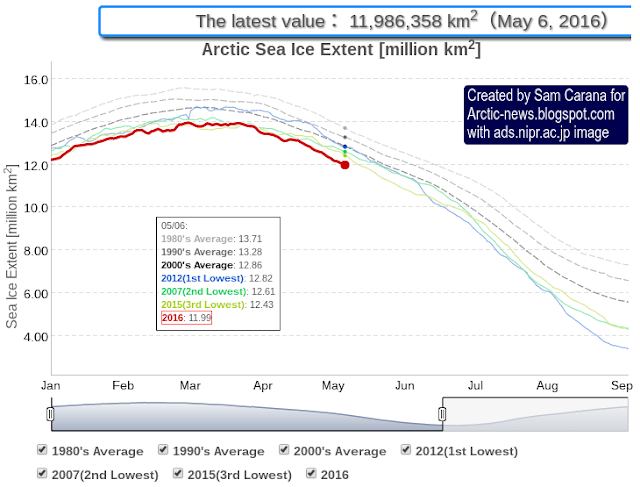 • The Threat of Wildfires in the North
http://arctic-news.blogspot.com/2013/06/the-threat-of-wildfires-in-the-north.html