How Much Warming Have Humans Caused?

How much did temperatures rise since 1900?

A polynomial trend can reduce variability such as caused by volcanoes and El Niño events. The graph below was created with the NASA L-OTI monthly mean global surface temperature anomaly, which has a 1951-1980 baseline, and then with 0.29°C added, which makes the anomaly 0°C in the year 1900 for the added polynomial trend.

This gives an idea of how much temperatures have risen since the year 1900, with a rise for both February and March 2016 showing up that was more than 1.5°C, as also illustrated by the image below. The trend further points at temperature anomalies that will be more than 1.5°C (from 1900) within a decade and more than 2°C soon thereafter. 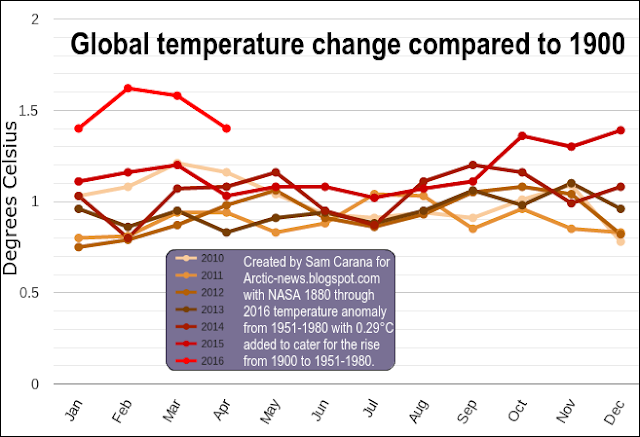 To see by how much temperatures have risen compared to pre-industrial levels, we need to go back further than 1900. The graph below shows that carbon dioxide concentrations have gone up and down between levels of roughly 180 ppm and 280 ppm over the past 800,000 years. Recently, carbon dioxide levels reached a peak of well above 400 ppm (411 ppm peak hourly average on May 11, 2016). 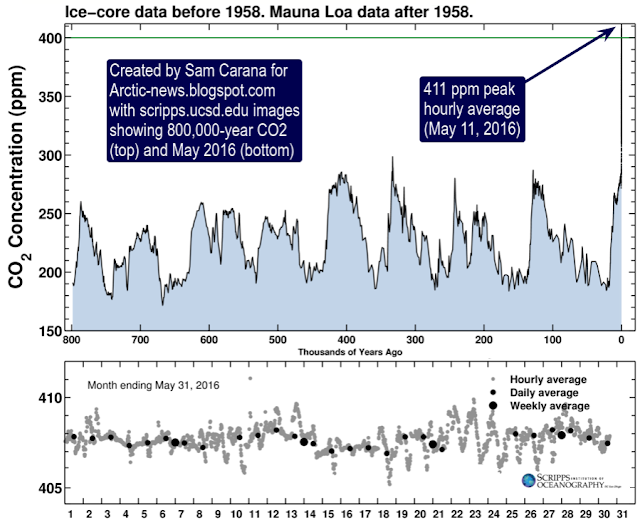 The image below, from an earlier post, shows how in the past, over the past 420,000 years, temperatures have gone up and down within a window of approximately 10°C (18°F), in line with cycles in the Earth orbit (Milankovitch cycles). Levels of carbon dioxide and methane have gone up and down accordingly, with carbon dioxide moving between 180 ppm and 280 ppm and methane roughly between 300 ppb and 700 ppb. 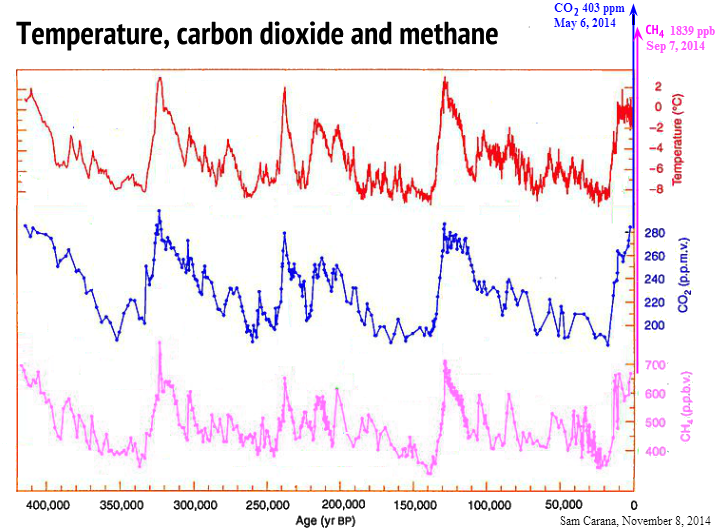 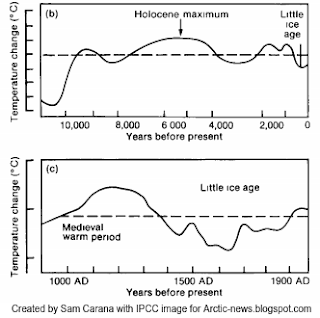 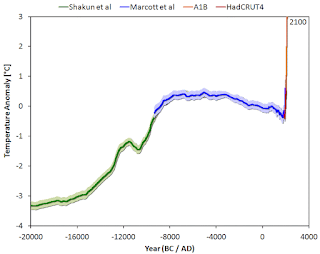 The graph on the right, created by Jos Hagelaars, shows that temperatures started rising some 20,000 years ago, reaching a peak some 7000 years ago (in the blue part of the graph). For more detail, also see the comic added at the end of this post.

The graph underneath, based on work by Marcott et al., focuses on this blue part of the graph, while using a 1961-1990 baseline. Temperatures reached a peak some 7000 years ago, and then came down to reach a low a few hundred years ago.

The peak and the bottom temperatures (highlighted in red on image on the right below) for that period suggest there was a fall of more than 0.7°C. 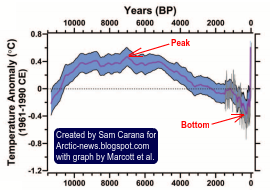 So, a few hundred years ago, temperatures were falling and they would have kept falling, in line with the Milankovitch cycles, had there been no warming caused by humans.

From that bottom point, temperatures first rose by about 0.4°C, overwhelming the downward trend that would otherwise have taken temperatures down further, and then there was an additional rise of at least 1.05°C, when using a baseline of 1961-1990, indicating that humans caused a total of at least 1.45°C warming.

Lewis & Maslin (2015) suggest that, because CO2 began to rise from a low point in 1610, that year could be taken as the start of the Anthropocene. The image on the right also shows that the year 1750 was a low point for CO2 levels and temperature, i.e. well below the baseline of 1961-1990. 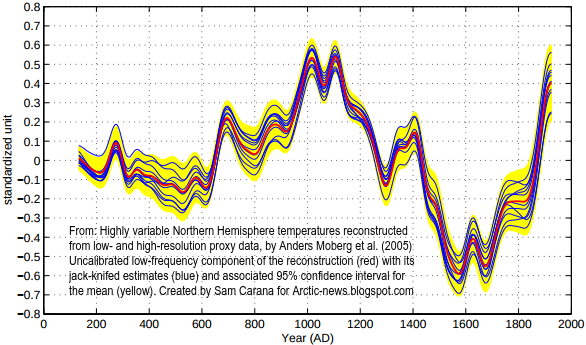 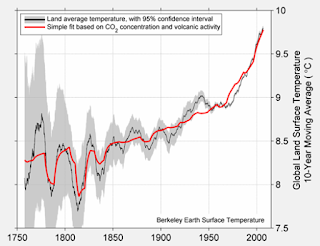 The image on the right is from BerkeleyEarth.org. The wider fluctuations back in time reflect volcanic activity and greater uncertainty, while a simple fit shows a temperature rise of 1.5°C in the past 250 years (1750-2000), of which about 0.9°C occurred in the past 50 years.

Humans have caused even more warming?

The situation looks to be even worse than what the above figures may suggest. Indeed, the bottom low point in the Marcott graph would have been even lower had there been no warming by humans.
The fact that humans did cause substantial warming between 1800 and 1900 is illustrated by the graph below, from a recent post by Michael Mann, who adds that some 0.3°C greenhouse warming had already taken place between the year 1800 and the year 1900. 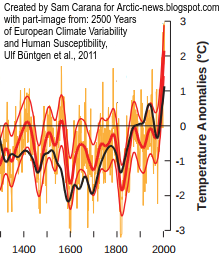 Further studies suggest that humans also caused substantial warming well before 1800, as illustrated by the image on the right. While this study focuses on Europe, it does suggest a rise from 1600 to 1800.

Another example of warming caused by humans before 1800 is presented in research by Dull et al., which suggests that burning of Neotropical forests increased steadily in the Americas, peaking at a time when Europeans arrived in the late fifteenth century. By 1650, some 95% of the indigenous population had perished. Regrowth of forests led to carbon sequestration of some 2 to 5 Pg C, thereby contributing to a fall in atmospheric carbon dioxide recorded in Antarctic ice cores from about 1500 through 1750.

Since at least the fourth century A.D., coal has
been burned in China. W. F. Ruddiman further points in a 2007 paper at human emissions from burning biomass and irrigation, livestock and human waste, and the resulting climate system feedbacks. As illustrated by the image on the right, this had already caused substantial warming prior to the industrial revolution.

In conclusion, substantial warming took place before 1900, making that temperatures were higher than what they would have been had humans caused no warming. Greenhouse gases emitted by people held off a temperature fall that would otherwise have naturally occurred, and they caused a temperature rise on top of that.

The above images only account for a half-year period (November 2015 to April 2016), so they are only indicative for what the total rise will be for the year 2016. Nonetheless, when taking into account warming caused by people before 1900, the year 2016 looks set to hit or even exceed the guardrails that the Paris Agreement had pledged would not be crossed. The situation looks even worse when considering that temperatures measured in ice cores already included a substantial amount of warming due to humans even before the start of the Industrial Revolution.

However, this ∆O does not reflect the full impact of human emissions. Temperatures would have been lower had there been no emissions by humans. The full warming impact due to people's greenhouse gas emissions therefore is ∆E. This ∆E is higher than the often-used observed rise, since the baseline would have been lower without warming caused by humans, i.e. including the warming that was already caused before the year 1750.

At the same time, part of global warming caused by people is currently masked due the aerosol emissions (∆M). Such aerosol emissions result mainly from burning of fossil fuel and biomass. There's no doubt that such emissions should be reduced, but the fact remains that the current temperature rise may increase substantially, say, by half when the masking effect disappears.

Thus, the full (unmasked) current warming caused by humans is the sum of these two, i.e. ∆E + ∆M, and the sum could be well over 3°C.

In addition, there is a future temperature rise that's already baked into the cake (∆F). Some feedbacks are not yet very noticeable, since some changes take time to become more manifest, such as melting of sea ice and non-linear changes due to feedbacks that are only now starting to kick in. Furthermore, the full effect of CO2 emissions reaches its peak only a decade after emission, while even with the best efforts, humans are likely to still be causing additional emissions over the coming decade. All such factors could jointly result in a temperature rise greater than ∆E + ∆M together, i.e. ∆F could alone cause a temperature rise of more than 5°C within a decade.

In summary, total anthropogenic global warming warming (∆A) or all warming caused by humans (∆E + ∆M + ∆F) could be more than 10°C (18°F) within one decade, assuming that no geoengineering will take place within a decade.

• The Columbian Encounter and the Little Ice Age: Abrupt Land Use Change, Fire, and Greenhouse Forcing, by Dull et al., in:
https://www.sciencenews.org/article/columbus-arrival-linked-carbon-dioxide-drop