Since early April, 2016, there have been problems with the sensor on the F-17 satellite that provided the data for many Arctic sea ice images. On April 12, NSIDC issued a notice that it had suspended the provision of sea ice updates. On May 6, NSIDC announced that it had completed the shift to another satellite. The red dotted line in the image below shows data from the F-18 satellite from April 1 to May 15, 2016. 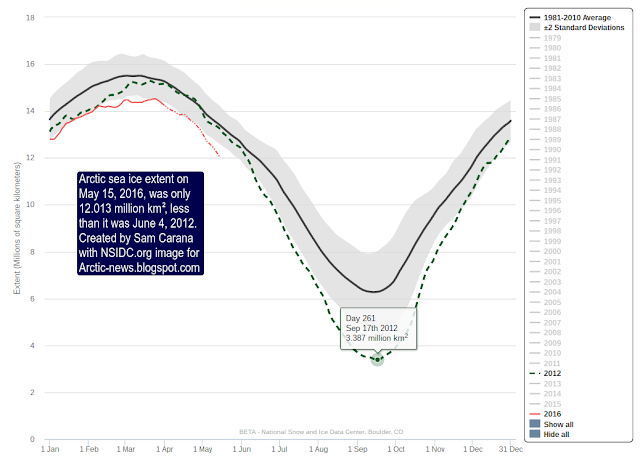 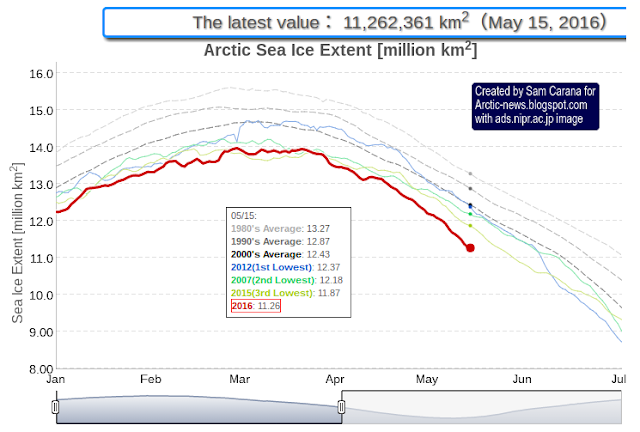 The Cryosphere Today is still using data from the F17 satellite, showing some weird spikes. Albert Kallio has taken a recent image and removed faulty spikes, resulting in the image below showing sea ice area up to May 3, 2016.


Importantly, above image confirms that Arctic sea ice in 2016 has indeed been very low, if not at its lowest for the time of the year. Especially since April 2016, sea ice has fallen far below anything we've seen in earlier years. Below, Albert elaborates on comparing data. 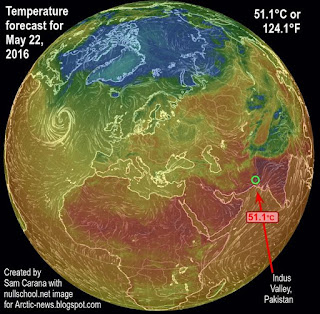 Arctic sea ice is in a bad shape and looks set to deteriorate even further, for a number of reasons.

Insolation during the months June and July is higher in the Arctic than anywhere else on Earth. Greenhouse gases are at record high levels: CO2 was 408.2 ppm on May 12, 2016, and methane levels are high and rising, especially over the Arctic.

Ocean heat is also very high and rising. The image below shows that oceans on the Northern Hemisphere were 0.93°C (or 1.7°F) warmer in the most recent 12-months period (May 2015 through April 2016) than the 20th century average. 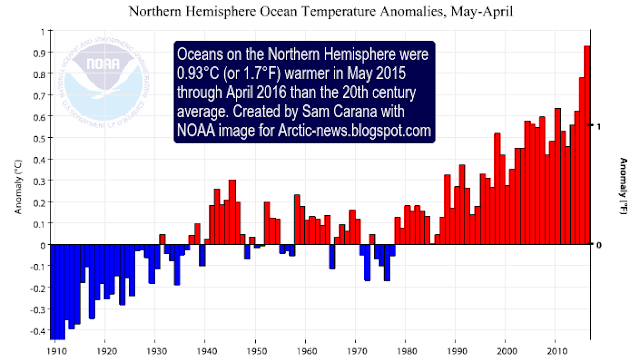 The situation is further illustrated by the image below, using the NOAA data with a trendline added that points at a rise of 3°C (5.4°F) before the year 2040.

Chances are that Arctic sea ice will be largely gone by September 2016. As the ice declines, ever more sunlight gets absorbed by the Arctic Ocean. This is one out of numerous feedbacks that are hitting the Arctic. The danger is that, as these feedbacks start to kick in more, heat will reach the seafloor of the Arctic Ocean and trigger methane to be released in huge quantities from the Arctic Ocean seabed.

Recently, an abrupt methane release from the Arctic Ocean seafloor did enter the atmosphere over the East Siberian Sea, showing up with levels as high as 2578 ppb (at 586 mb on May 15, 2016, pm, see image below). Such abrupt releases are indications that methane hydrates are destabilizing and are warnings that climate catastrophe is waiting to happen. 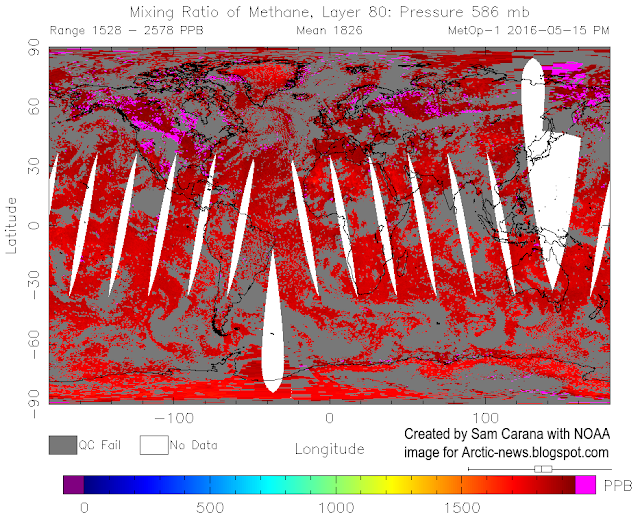