Care for the Ozone Layer

Stratospheric Water Vapor over the Arctic 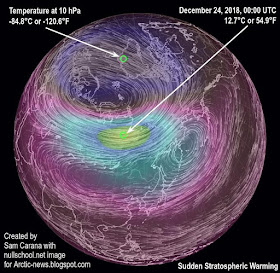 Around the time of the December Solstice, very little sunlight is reaching the Arctic and temperatures over land at higher latitudes can get very low. At the same time, global warming has made oceans warmer and this keeps air temperatures over water relatively warm in Winter. This can lead to a number of phenomena including sudden stratospheric warming and moistening of the stratosphere.

Sudden stratospheric warming is illustrated by the image on the right, showing temperatures in the stratosphere over Siberia as high as 12.7°C or 54.9°F on December 24, 2018, and temperatures as low as -84.8°C or -120.6°F over Greenland. 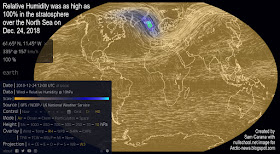 At the same time, relative humidity was as high as 100% in the stratosphere over the North Sea, as the second image on the right shows.

Moistening of the stratosphere was even more pronounced on December 24, 2016, as illustrated by the third image on the right.

Storms over the U.S. 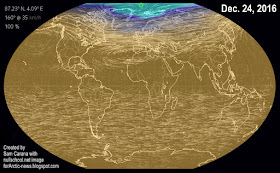 Jennifer Francis has long pointed out that, as temperatures at the North Pole are rising faster than at the Equator, the Jet Stream is becoming wavier and can get stuck in a 'blocking pattern' for days, increasing the duration and intensity of extreme weather events.

This can result in stronger storms moving more water vapor inland over the U.S., and such storms can cause large amounts of water vapor to rise high up in the sky.

Water vapor reaching stratospheric altitudes causes loss of ozone, as James Anderson describes in a 2017 paper and discusses in the short 2016 video below.

Stratospheric water vapor can also result from methane oxidation in the stratosphere. Methane concentrations have risen strongly at higher altitudes over the years. Noctilucent clouds indicate that methane has led to water vapor in the upper atmosphere.

The danger is that, as the Arctic Ocean keeps warming, large eruptions of methane will occur from the seafloor. Ominously, high methane levels have recently shown up on satellite images over the Arctic at lower altitudes, indicating the methane is escaping from the sea.

The Importance of the Ozone Layer 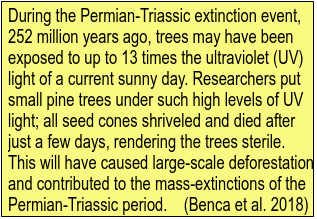 Increases in stratospheric water vapor are bad news, as they speed up global warming and lead to loss of stratospheric ozone, as Drew Shindell pointed out back in 2001.

It has long been known that deterioration of the ozone shield increases ultraviolet-B irradiation, in turn causing skin cancer. Recent research suggest that, millions of years ago, it could also have led to loss of fertility and consequent extinction in plants and animals (see box right).

As the left panel of the image below shows, growth in the levels of chlorofluorocarbons (CFCs) has slowed over the years, but their impact will continue for a long time, given their long atmospheric lifetime (55 years for CFC-11 and 140 years for CFC-12, CCl2F2).

Furthermore, as the right panel shows, the impact of nitrous oxide (N₂O) as an ozone depleting substance (ODS) has relatively grown, while N₂O levels also continue to increase in the atmosphere.

In conclusion, rising levels of emissions by people constitute existential threats in many ways. Rising temperatures cause heat stress and infertility, and there are domino effects. Furthermore, stratospheric ozone loss causes cancer and infertility.

Only once the ozone layer formed on Earth some 600 million years ago could multicellular life develop and survive. Further loss of stratospheric ozone could be the fastest path to extinction for humanity, making care for the ozone layer imperative.

As described in an earlier post, Earth is on the edge of runaway warming and in a moist-greenhouse scenario oceans evaporate into the stratosphere with loss of the ozone layer.

• Stratospheric ozone over the United States in summer linked to observations of convection and temperature via chlorine and bromine catalysis, by James Anderson et al. (2017)
https://www.pnas.org/content/114/25/E4905