Ten Degrees Warmer In A Decade?

There are a number of elements that determine how much the total temperature rise will be, say, a decade from now: 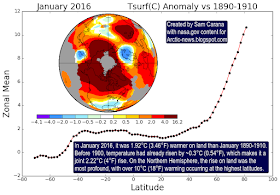 Removal of aerosols: With dramatic cuts in emissions, there will also be a dramatic fall in aerosols that currently mask the full warming of greenhouse gases. From 1850 to 2010, anthropogenic aerosols brought about a decrease of ∼2.53 K, says a recent paper. In addition, people will have emitted a lot more aerosols since 2010.

Albedo change: Warming due to Arctic snow and ice loss may well exceed 2 W per square meter, i.e. it could more than double the net warming now caused by all emissions by people of the world, calculated Professor Peter Wadhams in 2012.

Methane eruptions from the seafloor: ". . . we consider release of up to 50 Gt of predicted amount of hydrate storage as highly possible for abrupt release at any time," Dr. Natalia Shakhova et al. wrote in a paper presented at EGU General Assembly 2008. Authors found that such a release would cause 1.3°C warming by 2100. Note that such warming from an extra 50 Gt of methane seems conservative when considering that there now is only some 5 Gt of methane in the atmosphere, and over a period of ten years this 5 Gt is already responsible for more warming than all the carbon dioxide emitted by people since the start of the industrial revolution.

Note that the above scenarios assume that no geoengineering will take place within a decade.

So, will climate catastrophe occur in a decade or later? There are many indications that the odds are large and growing rapidly. Some say climate catastrophe is inevitable or is already upon us. Others may like to believe the odds were rather small. Even so, the magnitude of the devastation makes it imperative to start taking comprehensive and effective action now.