Sea ice close to the North Pole looks slushy and fractured into small pieces. The image below shows the situation on July 8, 2016.

For reference, the bars at the bottom right show distances of 20 km and 20 miles. By comparison, sea ice in the same area did develop large cracks in 2012, but even in September 13, 2012, it was not broken up into small pieces, as shown by this image at a recent post.

As shown by above image, by Jim Pettit, Arctic sea ice volume has been in decline for decades. While this may look like a steady decline, chances are that the sea ice will abruptly collapse over the next two months, for the reasons described below.

The animation below, from the Naval Research Laboratory, shows Arctic sea ice thickness for 30 days up through July 8, 2016, including a forecast of 7 days.

Below is a new Naval Research Laboratory image, dated July 4, 2016
and contributed by Albert Kallio with the following description. 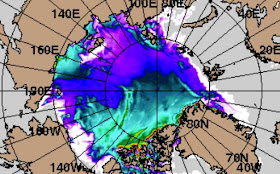 NORTH POLE SEA ICE DISAPPEARING VERY RAPIDLY 4.7.2016Albert Kallio: The upgraded US Navy sea ice thickness system revealed extreme rates of sea ice pulverization and melting on 4.7.2016 which justifies a continued close attention to the developments on the Arctic Ocean. Due to virtually continuous storm centering the North Pole for weeks now, warm water upswells and sea water mixing drives base melting of icefloes besides wave actions that both wash and pulverize broken sea ice. The more pulverized sea ice becomes, the greater its 3-dimensional surface area that sits in water becomes, this easing transfer of heat from ocean to sea ice. In addition, honeycombing of ice also flushes ice with water in a stormy weather. The final factor being that most of sea ice is very recent (seasonal) ice that contain residues of salts, when saline brine is expelled this creates boreholes into ice making it "rotten ice" easily.
https://www7320.nrlssc.navy.mil/GLBhycomcice-12/navo/arcticictn_nowcast_anim30d.gif 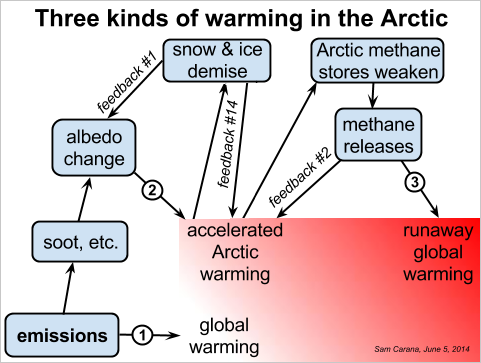 Sea ice decline reflects the extra energy added to the Arctic, as global warming and feedbacks are hitting the Arctic particularly strongly. Three of these feedbacks are depicted in the image on the right.

As the sea ice melts, sea surface temperatures will remain at around zero degree Celsius (32°F) for as long as there is ice in the water, since the extra energy will first go into melting the ice. Only after the ice has melted will the extra energy start raising the temperature of the water.

each gram of ice takes 334 Joule of heat to change into water, while the temperature remains steady at 0°C ( 32°F).

In other words, melting of the ice absorbs 8 times as much heat as it takes to warm up the same mass of water from zero to 10°C. As sea ice disappears, extra energy instead goes into raising the temperature of the water, as depicted in the image on the right, and as further described at the feedbacks page as feedback #14.

Sea ice can reflect as much as 90% of the sunlight back into space. Once the ice has melted away, the water of the ocean reflects only 6% of the incoming solar radiation and absorbs the rest. Albedo change is depicted in above image as feedback #1. As Professor Peter Wadhams once calculated, warming due to Arctic snow and ice loss could more than double the net warming now caused by all emissions by all people of the world.

Once the sea ice has disappeared, a lot more energy will get absorbed by the Arctic Ocean, i.e. energy that was previously reflected back into space and energy that previously went into changing ice into water.

Furthermore, as the sea ice disappears, chances increase that storms will develop that come with rain and winds that can batter and push the remaining sea ice out of the Arctic Ocean, while storms can also increase the amount of water vapor in the atmosphere and the occurrence of cirrus clouds that can trap heat.

Methane is a further feedback, depicted as feedback #2 in the image further above. As the water of the Arctic Ocean gets warmer, the danger increases that heat will reach hydrates at the seafloor and that this will trigger release of huge amounts of methane, in an additional self-reinforcing feedback loop that will make warming in the Arctic accelerate further and that threatens to escalate into a third kind of warming, i.e. runaway warming. Peter Wadhams co-authored a study that calculated that methane release from the seafloor of the Arctic Ocean could yield 0.6°C warming of the planet in 5 years (see video at earlier post). 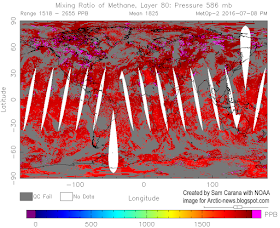 As above image shows, methane on July 8, 2016, reached levels as high as 2655 ppb. Such high levels typically occur due to methane hydrates getting destabilized. As the sea ice disappears, the situation could get worse rapidly, as illustrated by the images below.

These high sea surface temperature anomalies are the result of warmer water getting carried by the Gulf Stream below the sea surface of the Atlantic Ocean into the Arctic Ocean. The water carried into the Arctic Ocean is both warmer and saltier than the water at the surface, as the fresh cold meltwater forms a lid at the surface. At areas around Svalbard where the sea is rather shallow, the warmer water comes to the surface. These high anomalies thus indicate how much warmer the water now is that is entering the Arctic Ocean, as discussed in earlier posts such as this one.
The rapid recent rise in ocean heat is illustrated by above image, showing that oceans on the Northern Hemisphere in May 2015 through April 2016 were 0.93°C warmer than the 20th century average, whereas for the equivalent 2012 period the anomaly was merely 0.46°C. In other words, there now is more ocean heat, making the possibility of methane hydrates destabilization more threatening.

Meanwhile, the speed at which the Arctic is warming is changing the jet streams, as discussed by Paul Beckwith in the video below, following Paul's earlier video that's included in an earlier post.

There are many indications that changes to the climate are accelerating, causing extreme weather events to hit with increasing strength and intensity. Water vapor is a potent greenhouse gas and for each degree Celsius that temperatures rise, the atmosphere can hold 7% more water vapor, which will also lead to stronger storms such as cyclones. On the image below, typhoon Nepartak is approaching Taiwan, with wind speed as high as 103 mph or 165 km/h, and with cloud water as much as 9 kg per square m on July 7, 2016.

According to NASA, very powerful storms near the center of Nepartak's circulation were found to be dropping rain at a rate of over 193 mm (7.6 inches) per hour. Tall thunderstorms called "hot towers" were found to reach heights of 17.0 km (about 10.5 miles).

The image on the right shows a thermal image of Typhoon Nepartak on July 7 at 17:45 UTC. The colder the cloud tops, the higher they are in the troposphere and the stronger the storms.

Strong storms can bring water vapor high up into the stratosphere, contributing to the formation of cirrus clouds that trap a lot of heat that would otherwise be radiated away, from Earth into space.

Altogether, the combined global temperature rise due to global warming and feedbacks could exceed 10°C or 18°F within a decade, as discussed in previous posts such as this one.

• Three Kinds of Warming in the Arctic
http://arctic-news.blogspot.com/2016/02/three-kinds-of-warming-in-arctic.html